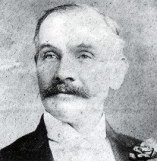 The first man successfully to take and project a 35 mm film in England. Born in Richmond, Virginia to English parents, Birt Acres was working in London as a photographer in November 1889. During 1892 he joined the large photographic materials company of Elliott and Son and became manager of their 'Dry Plate' works at Barnet, in North London. Acres had become interested at this time in photographing clouds, and in order to be able to reconstitute his time-lapse studies, devised a rapid lantern slide changer which he patented in December 1893. This would appear to represent the extent of his chronophotographic work before the arrival in England of Edison's Kinetoscope in October 1894. By December 1894, an electrical instrument maker, Robert Paul began to pirate these machines, and urgently needed an independent supply of films for them. Acres's assistant at Elliott's, Henry Short, was Paul's friend, and suggested Acres to Paul as someone who had an existing interest in the area, and the necessary photographic knowledge required to design a workable camera, and take and develop the films for it. The two men first met on 4 February 1895, and what subsequently occurred, became - and to some extent still is - a matter of controversy. According to Paul's account, he rejected Acres's idea as impractical and designed and built the camera himself. However, since it was Paul who approached Acres, and it was Acres, rather than Paul who subsequently patented the camera, and claimed copyright on the films, Paul's account seems of doubtful veracity. Certainly, what is clear is that Acres's role in the enterprise was undoubtedly of considerable importance.

Rapid progress was made, and a workable camera had been completed by the middle of March. A successful test film featuring Henry Short, was taken outside Acres's house, and on 29 March Paul sent a clip from it to Thomas Edison. Commercial production began on 30 March with the Oxford and Cambridge Boat Race, and by the beginning of June several simple comic, dramatic and actuality subjects were available. These included The Arrest of a Pickpocket, The Comic Shoeblack, The Boxing Kangaroo, Performing Bears, and a film of the Derby. A photograph of Acres filming the 1895 Derby has survived and it shows that the camera used was relatively portable. Unlike Paul, who was careful to retain his existing business, Acres committed himself wholly to the new enterprise, and resigned from Elliott's in April 1895. This gave him the freedom to travel and he entered negotiations with the Stollwerck company, who in June supported a trip to Germany, where he took several films of the opening of the Kiel Canal. While he was away, Paul began to advertise himself as the 'Sole European Manufacturer' of the films, and on Acres's return to England in mid July, the association between the two men ended in acrimony and mutual recriminations.

With Paul gone, Acres now turned his attention to achieving film projection. He claimed several times during 1896 and 1897 that he had given private demonstrations during August and September 1895, and although no documentary proof of these performances has yet been found, it seems certain that successful projection must have occurred sometime in 1895 since Acres was able to give a public performance to members of the Lyonsdown Photographic Club on Friday 10 January 1896. He gave a further showing to members of the Royal Photographic Society at 12 Hanover Square, London on 14 January; and on 21 March commercial performances began with the Kineoptikon, at 2 Piccadilly Mansions, London. Admission was 6d and the films were shown from 2 p.m. to 6 p.m., and from 7.30 p.m. to 10.00 p.m. On 27 June Acres secured a film of the Prince and Princess of Wales arriving at the Cardiff Exhibition, and this resulted in him being asked to give the first royal command film performance at Marlborough House on 21 July.

So far Acres had enjoyed almost continual success, and by the middle of 1896 was well placed to reap substantial financial rewards with the demand for commercial film shows, especially at music halls, rapidly increasing. But he disliked the role of a showman, and although he sold his films to other exhibitors, he disapproved of the use of film as simply a 'turn' inserted in a variety entertainment, believing that the future for cinematography lay in the photographic and educational markets. While Paul and others rose to the challenge of creating a new business, Acres spent much of his time between 1896 and 1899, touring the country, lecturing and giving performances to scientific and photographic societies. This brought him prestige and press coverage, but little profit, and by the end of 1897 it was clear to contemporaries that he had lost - or thrown away - the lead that he had once had. In an attempt to improve his fortunes, he introduced the Birtac, a 17.5 mm combined camera and projector. Targeted at the amateur photographic market, it was available from October 1898. The Birtac was a genuine innovation, and miniaturisation represented a significant advance, both technically and conceptually, but unfortunately the instrument only had limited success, and Acres returned to 35 mm filmmaking (to 1900), and to a film-coating, developing and printing business that he had established in July 1897. Serious-minded and a perfectionist, Birt Acres was a clever and inventive man, and far more committed to the future of film than most of his contemporaries; but he was perhaps temperamentally unsuited to life as an entrepeneur. Although connected with the film business until his death, his later years were not successful financially, and he became bankrupt in both 1909 and 1911.

Despite the number of British film 'firsts' that he could claim, Acres's reputation as a pioneer did not remain unscathed. In fact, the diminution of his reputation began in his lifetime, with the publication in 1912 of a highly inaccurate account of the origins of cinematography in England by F.A. Talbot from information supplied by Paul. Acres's own copy of Talbot's book, Moving Pictures, with his acerbic pencilled comments, is now in the library of the British Film Institute. When serious interest in early film history began after the First World War, Will Day (the leading film historian of the time) was far more interested in promoting the nebulous claims of William Friese Greene, than in recording the actual achievements of Acres. Many years of neglect followed, and it was not until the publication of John Barnes's The Beginnings of the Cinema in England in 1976 that the first detailed study of his work appeared. More sympathetic in its treatment than Barnes (who tended to follow Paul's version of events in his account of the relationship between the two men) is Lange-Fuchs' biography published in 1987. This work is also valuable in providing further details about Acres's activities in Germany. Now recognised as a film pioneer of outstanding importance in both England and Germany, Acres's reputation seems to be secure at last.

Birt Acres, 'The Making and Exhibiting of Living Pictures', Journal of the Camera Club, May 1897