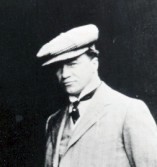 Smith was born on 4 June 1874 in Faversham, Kent, the son of a market gardener. When Albert was in his mid-teens the Smith family emigrated to the United States. While the family journeyed to California, Albert stayed in New York to try his fortune as a performer. The young Smith had a natural aptitude for mechanics, which led to his perfecting and patenting a loose-leaf ledger system, developing early automobile parts, but also to a gift for magic and sleight-of-hand. It was this latter talent that led him to team up with a talented cartoonist from England, J. Stuart Blackton, and another Englishman Ronald Reader to form a touring trio, presenting magic, magic lanterns, drawings, ventriloquism and recitations. Blackton found a small fame through being filmed for Edison as a cartoonist in August 1896, and early in 1897 they acquired an Edison projector and began exhibiting films as part of their act. Their partnership of March 1897 was initally called Edison Vitagraph, a title deliberately close to the Edison Vitascope. Still continuing with their magic show (as they would do until July 1898), Smith and Blackton started producing advertising slides and the occasional advertising film under the title the Commercial Advertising Bureau. Smith converted the projector into a camera and the American Vitagraph began film production in late 1897, first simple actualities, then their first fiction film, The Burglar on the Roof (1898), with Blackton acting and Smith operating the camera. The company found also success with Tearing Down the Spanish Flag (1898), a simple symbolic drama capitalising on the Spanish-American war.

The partnership was founded on Blackton's dramatic flair and Smith's technical know-how, which included a vital reframing device for the Vitagraph projector. They also soon found themselves battling against the Edison company, over patent infringement and violation of copyright - they had been duplicating some of William Paley's Spanish-American War films - then with exhibitor William Rock which, however, resulted in alliance and Rock joining Blackton and Smith as the third member of Vitagraph in August/September 1898. 'Pop' Rock brought experience and stability to the company, though his presence did not prevent Smith getting into scrapes such as the Jeffries v Sharkey boxing match on 3 November 1899, when Smith pirated film of the fight under the bright lights set up by William Brady and the Biograph camera team. Following the Edison law suit Vitagraph had been operating under licence, passing on their negatives to Edison after a period of months, and when this agreement was terminated in 1900, for a period 1901-02 Vitagraph did not produce films at all.

After such rocky beginnings, with 1905 and the arrival of the Nickelodeon period Vitagraph began to flourish, becoming incorporated as the Vitagraph Company of America, and rapidly turning into a major producer and soon with Biograph the pre-eminent American film company in the pre-First World War period. A studio was opened in California in 1911, and a stock company developed that included such internationally popular actors as Florence Turner, Maurice Costello, John Bunny, Flora Finch and Clara Kimball Young. From being the technical genius of the partnership Smith became the financial brains behind Vitagraph, running the company with a somewhat cold-hearted efficiency while Rock died and Blackton departed. Vitagraph ceased to be the power it had once been after the war, and the company was purchased by Warner Bros. in 1925. On his retirement Smith indulged in his favourite occupation, yachting, and wrote a singularly inaccurate autobiography, which includes an entirely imaginary visit to the Boer War. He gave employment to many siblings (he was one of eight children), including George who managed Vitagraph's London office, Stephen the studio manager, and David a director. Two of his three wives were film actresses: Hazel Neason and Jean Paige. In 1947 he was one of a small group of American pioneers (George K. Spoor, William Selig and Thomas Armat) given a special Academy Award for their contributions to the development of motion pictures.