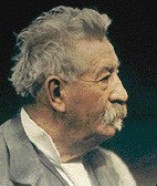 Father of Louis and Auguste, inventors of the Cinématographe

Born on 13 March 1840 at Haute-Saone, Ormoy, France, Antoine was orphaned at fourteen. He took up carpentry and studied scientific books before becoming apprenticed to painting teacher Auguste Constantin, and after military service studied under photographer Nadar. He married in 1861 and set up a small photographic portrait studio at Besancon, where his sons Auguste and Louis were born. He later moved to Lyon, where a third son Edouard was born, and three daughters. Antoine set up a small factory producing photographic plates, but even with Louis and a young sister working from 5 am to 11 pm, it was struggle to make make it a success. In 1882 it looked as if they would fail, but when Auguste returned from military service the boys designed the machines necessary to mechanise their father's plate production and devised a very successful new photo plate, 'etiquettes bleue', and by 1884 the factory employed a dozen workers.

In the autumn of 1894 Antoine was inspired by an Edison peepshow Kinetoscope, and took a length of film to show his sons, encouraging them to produce a system that would produce similar living pictures, but project them onto a screen. He maintained an interest in the project's progress, arranging with Clément-Maurice the first show to a paying public on 28 December 1895 at the Salon Indien, basement of the Grand Café, Boulevard des Capucines, Paris. The owner refused an offer of 20% of the receipts and charged a flat rate of thirty francs a day. There was an afternoon preview to an invited audience, including Georges Méliès, with photographer Jacques Ducom in charge of the electric arc, engineer Charles Moisson (who made the first trial Cinématographe) turning the handle, and Antoine collecting the invitations. He also appeared in one of the films, Partie d'Ecarté. That evening, thirty-three members of the public paid one franc each to see the Cinématographe presentation. Within three weeks, takings were 2,000 francs a day. Although the Skladanowskys had projected very short films at the Berlin Wintergarden the previous month, and projections to a paying public had been given by the Lathams and Jenkins / Armat in the USA, that evening's show is often credited as the world's first cinema presentation to a paying public. It certainly heralded the beginnings of the French film industry, which was to become one of the most important in the world. By now, Antoine had become something of a financial embarrassment to the Lumière firm, incurring mounting debts with the purchase of various villas, and he was eventually bought out. During his retirement he took up painting, and exhibited in several Salons. He died on 16 April 1911.