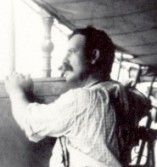 The brother of American Biograph founder Harry Marvin, Arthur was a mainstay of the company from its earliest years until his death in 1911. First recorded working for Biograph in 1898, he and Billy Bitzer were sent to Cuba to film the wreck of the Maine and other scenes relating to the Spanish-American war and thereafter worked as one of Biograph's main camera team on both studio and outdoor subjects. A large, genial and easy-going character, according to Bitzer he described himself rather grandiloquently as 'the captain of the good ship Take-it-Easy with nine decks and no bottom, which sails on forever and foever sails on'. Though 'seldom affected with the exuberance of ambition' (Bitzer) Marvin continued with the company to become cameraman for a number of D.W. Griffith's first films, including his very first The Adventures of Dollie (1908), having pointed out Griffith (then an actor) as a man with potential. Griffith was soon to go to Harry Marvin, general manager of Biograph, and gently suggest that Billy Bitzer was more suitable than his brother for the artistic work that Griffith had in mind. Nevertheless Marvin did some imaginative work for Griffith, notably the ingenious lighting effects for Pippa Passes (1909). Marvin died suddenly and prematurely after shooting Priscilla's Engagement Ring (1911).