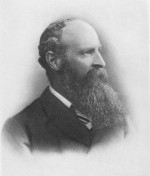 Educated at Cambridge, Bacon took holy orders in 1870 and worked as a curate for the next ten years before turning his attentions to scientific work. Astronomy and aeronautics had interested him from childhood, and he joined the British Astronomical Association, becoming a member of council. He was especially interested in eclipses, and in 1896 joined the expedition to observe the eclipse of the sun in Lapland. Bacon was a friend of J.N. Maskelyne the magician and his son Nevil (themselves descendants of astronomers) and when in 1897 they went to Queen Victoria's Diamond Jubilee with a film camera, Bacon was there to assist. Subsequently, Nevil, who was to be Bacon's frequent scientific collaborator, suggested that an adapted film camera might be used to record an eclipse, capturing the movements of the solar corona. He set to work to make a 'cinematograph telescope' which could take five or six pictures a second during the minute and a half of totality, and in December 1897 Bacon set off to India with this device. The party arrived at Buxar in central India, and Bacon, after 'practising diligently' with the cinematograph for weeks, took a series of pictures of the corona. Unfortunately the film seems to have disappeared or have been stolen on the voyage home, and all that remained were views of a Hindu pilgrimage and one of the Viceroy's camp.

But another eclipse was predicted for May 1900 in North Carolina, and this time Nevil Maskelyne accompanied the camera to ensure nothing went wrong. Despite parts of the equipment failing to arrive they managed to film the eclipse, the first ever produced. (Though it seems that the same eclipse in Spain was also filmed by Norman Lockyer's expedition, and a photograph of the apparatus is reproduced in l'Illustration). Bacon was also a keen balloonist, crossing the Irish Channel in 1902, conducting experiments in sound propagation, and with Maskelyne, in balloon inflation. He also took photographs from aloft, and some time in 1898 experimented with taking films during a flight with his daughter, Gertrude, his frequent collaborator. Frames from this, probably the first British aerial film, illustrate an article he wrote in the Strand Magazine later that year: they show part of the crowd watching the balloon ascend. Bacon continued his aeronautical work, and supplemented a meagre income by giving lectures, until his death from pleurisy in 1904.

Gertrude Bacon, The Record of an Aeronaut (London: John Long, 1907)