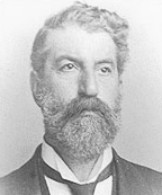 Founded in 1870, the Bamforth firm (headed by James Bamforth) originally specialised in the production of magic lantern slides photographed in their studio at Station Road, Holmfirth, Yorkshire, England. These were mainly 'Life Model' slides, narrative sequences acted out in front of painted backcloths, illustrating a temperance or religious theme. These popular tableaux - accompanied on screen by a live 'reading' of the story - were made in a similar way to early films, except of course the players never moved. The step from lantern slide making to film production was only logical. They already possessed the necessary costumes, backgrounds, amateur actors and experience in plot construction. By 1898 Bamforths were making films with Riley Brothers of Bradford, who had been involved in the technology of the new medium since 1896. Some of their films are of considerable significance, for despite the hackneyed plots - they were mostly 'borrowed' from ideas previously filmed by other producers - they reveal an embryonic understanding of the potential of film cutting and simple narrative construction. In The Kiss in the Tunnel for example, a long shot of a train entering a tunnel away from camera is cut to a close shot of a couple embracing in the carriage, followed by another long shot of the train moving towards the camera. Women's Rights (a satire on the suffrage question) contains the earliest known example of a cut to another direction within a scene with time continuity. These were innovative examples of film-making for the date, and it is fascinating to speculate what Bamforth's might have gone on to achieve. But although the films were shown locally, they were not included in the Bamforth's catalogues, and the company did not return to film-making until 1913. Their productions of this period included the popular Winky series. During the First World War their production finally ceased. With the ever-increasing popularity of moving pictures at the turn of the century, the demand for lantern slides diminished, but the picture postcard was then also coming into its own, and some of the Bamforth slides were re-issued as sets of coloured postcards. The firm survived into the 1990s as a manufacturer of seaside view cards, calendars and birthday cards.

John Barnes, The Beginnings of the Cinema in England(vols. 2-4)

Richard Brown, Notes on the Nomenclature and Dating of Some Early Bamforth Films (1994)