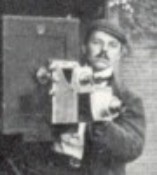 The most celebrated cameraman of the earliest years of American cinema, chiefly through his association with D.W. Griffith. Born in Roxbury, Massachusetts, Billy Bitzer worked as a silversmith before an interest in magic led to him joining Elias Koopman's Magic Introduction Company in 1894, marketing various novelties. Koopman was one of the four founders of the Mutoscope and Biograph Syndicate, and in 1897 the young Bitzer found himself working as W.K-L. Dickson's assistant on some of the earliest Biograph films. After Dickson had left for England Bitzer became a full-time camera operator for Biograph, and filmed news and actuality subjects, including a period in Cuba during the Spanish-American war of 1898, as well as innumerable short fiction films. Bitzer was still with the company in 1908 when he began his long association with director D.W. Griffith, becoming cameraman on virtually all of Griffith's Biograph output, including such notable titles as The New York Hat, A Corner in Wheat, The Lonedale Operator and Man's Genesis, and followed Griffith when he broke away from Biograph to film the cornerstones of American silent cinema The Birth of a Nation (1914) and Intolerance (1916). Bitzer's association with Griffith saw the establishment of many of the classic technical devices of cinema, from the close-up to the iris out, and it was Bitzer's technical ingenuity that made Griffith's ideas and dreams workable. He continued with Griffith to photograph Broken Blossoms (1919), Way Down East (1920) and others, but by 1920 Griffith was using Bitzer in association with other cameramen, and their partnership ended after America (1924). Bitzer, like his long-time associate, now isolated by the growth and advance of the film industry, went into virtual retirement. Through the 1930s he annotated the Biograph records at the Museum of Modern Art's Department of Film with Katharine Stone White and then worked on his memoirs, which were published posthumously.