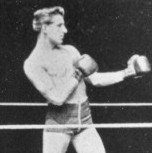 One of twelve children of a San Francisco family of Irish decent, 'Gentleman Jim' Corbett was a bank clerk before turning to professional boxing. To the often disreputable and dangerous world of boxing Corbett brought a new professionalism and scientific approach, and with it an increasing social acceptibility. He became world heavyweight champion in 1892 after defeating John L. Sullivan, and held on to the title (apart from a brief period of retirement when he offered the title to Peter Maher) until his 1897 bout with Bob Fitzsimmons. Prior to that, while appearing in the play Gentleman Jack, on 7 September 1894 Corbett met Peter Courtney in a bout specially arranged for filming in the Edison Black Maria studio. The second boxing contest to be filmed for the Kinetoscope (after the Cushing-Leonard fight), each round lasted a minute (which was all the film that the camera could hold) with rest periods while the film was changed. Corbett's manager William Brady acted as time-keeper. The fight was staged, with Corbett arranged to win by a knockout in the sixth round. He was paid $5,000 and a royalty on films exhibited; Courtney was paid $1,000.

Corbett's open air contest with Fitzsimmons at Carson City, Nevada on 17 March 1897 was filmed in its fourteen round entirety by Enoch Rector for the Veriscope company in a specially devised 63 mm format. Corbett was knocked out. The large sums involved (a $10,000 purse) were a direct result of the motion picture interest and exploitation, and began the process which turned boxing into a hugely profitable business. The finished film, taken from a single position, was an extraordinary 11,000 feet long, and though arousing much controversy, it played successfully all over the States and abroad. Corbett came close to regaining his title from James Jeffries in 1900, retiring from the ring in 1903 to concentrate on his acting career. This resulted in a number of roles in American feature films: The Man from the Golden West (1913), The Burglar and the Lady (1914), The Other Girl (1916), The Prince from Avenue A (1920), The Beauty Shop (1922), Broadway After Dark (1924) and Happy Days (1929).