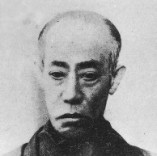 Ichikawa Danjuro IX was a legendary figure of the Kabuki theatre, ninth and last in an unbroken line that started with Danjuro I (1660-1774). Thought of as perhaps the greatest of all Japanese actors, he was a consummate master of his art who also did much to elevate the status of his profession, in 1887 becoming the first Kabuki actor to perform before the Emperor. At the peak of his profession in 1897, Danjuro had nothing but contempt for the suggestion made by advertising company Hiromeya that films be shown at the theatre, sneering at the very idea of the 'ship-brought' thing. However, associates of Danjuro started to plead with him that a cinematograph record of his act would be an important gift to posterity. Eventually he agreed, on the understanding that the film would remain part of his personal collection and would not be seen by anyone until after his death. A reel was shot of the Noh drama Momiji-gari (Maple Leaf Hunters, or Viewing Scarlet Maple Leaves), in which Danjuro played opposite Onoe Kikugoro V (1844-1903) as an ogress who has disguised herself as the Princess Sarashina. Filmed by Shibata Tsunekichi in the open air on a windy day in November 1899, Danjuro would allow only the one take, so that when his fan blew away in mid-performance the scene had to stay. The film re-emerged at the Kikikan theatre in 1907 where it was a great success and inspired a wave of fiction filmmaking based on traditional Japanese narratives. This film has indeed been handed down to posterity and is held by the National Museum of Modern Art in Tokyo.

The image below comes from a postcard dated from 1908 which shows Danjuro IX (right) and Onoe Kikugoro V in Momiji-gari. The image has been kindly provided by its owner Dan. 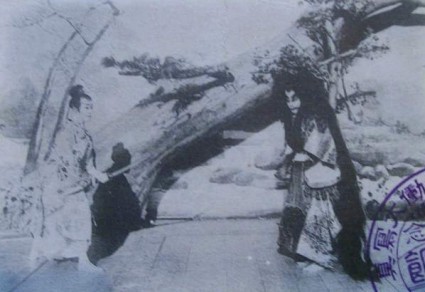