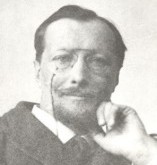 Georges Demenÿ was born at Douai in 1850. In 1874, after studying at Douai and Lille, he reached Paris and enrolled in the physiology course of E-J. Marey, quickly becoming one of the scientist's closest associates. Together they established a programme of research which was to lead to the creation of the 'Station Physiologique', which opened in 1882 in the Bois de Boulogne. Demenÿ was Marey's assistant there, and the two researchers produced a considerable body of work, photographing human and animal movement using sequential photography, that is, chronophotography (a camera with fixed plate, and later moving plate, 1882-1888). The 'film' career of Marey and Demenÿ really began in 1888 when Marey's camera recorded on a sensitive strip several series of images. From 1890 they were using celluloid film. Several hundred filmstrips (90 mm wide, about 1.20 metres long) were made at the Station, at Joinville and at Naples (where Marey, often away from Paris, owned a house). On 3 March 1892, Demenÿ filed a patent for the Phonoscope, an apparatus for glass discs (42 cm diameter) with a series of chronophotographic images on their circumference which could be projected using a powerful Molteni lantern. After the Phonoscope was successfully presented at the Exposition Internationale de Photographie de Paris (1892), Demenÿ dreamed of commercialising chronophotography, and pushed Marey to order the manufacture of six cameras intended for sale. Relations between them soured when Demenÿ formed, in December 1892, the Société de Phonoscope. Marey refused to co-operate in this enterprise, so Demenÿ devised his own camera, inventing the 'beater' mechanism - used in many later projectors - to move the film.

In 1894 Demenÿ was dismissed from the Station Physiologique. He installed himself at Levallois-Perret, rue Chaptal, and made about a hundred very diverse Phonoscope scenes: Danseuse de French-Cancan, Premiers pas de Bébé, and Passage du Train. In December 1894, Louis Lumière visited Demenÿ who showed him a design of a cam-and-claw mechanism for moving film - the fascinating sketches for which have been rediscovered recently - but Lumière did not seem interested. On 22 August 1895 Demenÿ and sleeping partner Léon Gaumont signed their first contract, and in November the Phonoscope (renamed Bioscope) was offered for sale. Early in 1896, the Biographe camera using 60 mm unperforated film was also on offer. Projection by means of Phonoscope/Bioscope discs offered a very brief entertainment. The Biographe camera was already archaic in 1896, in contrast to those of Lumière or de Bedts, and Demenÿ's machines were a financial failure. However, Gaumont exploited Demenÿ's principle of the beater movement with great success, and Demenÿ entrused to him the financial battle of cinematography, returning to his first passion, gymnastics. In 1909 he published a brochure, Les Origins du cinématographe, describing in a clumsy fashion his part in the invention of cinema, but his claims were always rejected by the 'Lumieristes' and the friends of Marey. Only today is it possible to understand the pioneer role played by Demenÿ in the commercialisation of chronophotography. From 1892 his 'movies' had a wide variety of subject, the glowing and lively images of the Phonoscope already representing the true concept of cinema.