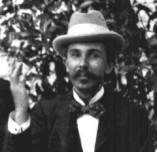 W. K-L. Dickson is a key figure in the practical development of cinematography. He was born in France and emigrated to the United States in 1879. Joining Thomas Edison in 1883, he quickly rose to become one of his senior associates. Work on motion pictures began in 1888, and continued - with many interruptions - for several years. Dickson and his assistants were influenced in their perception of the problem and its solution by the ideas of Edison himself, Muybridge, Anschütz, and particularly E-J. Marey, who Edison visited in Paris in August 1889. After experiments involving microphotographs, a Tachyscope and a horizontal-feed camera, the final form of a vertically-fed, 35 mm camera utilising celluloid strips with a double row of perforations, had been reached by October 1892. The famous Black Maria revolving film studio was designed by Dickson, and had been completed by February 1893, but work on the viewing device - the Kinetoscope - delayed the start of regular film production until January 1894. A wide variety of subjects, many featuring athletes (an idea probably suggested by Muybridge's work) and popular entertainers, was produced at this studio. The first Kinetoscope parlour was opened in New York in April 1894, and by the end of the year news of the machine had spread throughout the world. Although crude in both appearance and effect, it was a successful and practical device, and it provided the inspiration for many later attempts to achieve film projection. By 1894 Dickson had reached the height of his reputation with Edison, and in that year he and his sister wrote a biography of Edison in which they discussed and illustrated the early film work at West Orange. But this same year also marked the time when Dickson's loyalty to his employer was compromised as he became covertly involved with the Lathams in their film enterprises. W.E. Gilmore, Edison's newly appointed General Manager, discovered this deception and reported it to Edison. Perhaps overconfident of the security of his position, Dickson challenged Edison to choose between retaining Gilmore or himself. The result was that he left West Orange at the beginning of April 1895. It was a rather sad end to an often brilliant career, and he never subsequently regained the prestige he had enjoyed there.

Working with the Lathams proved to be uncongenial - they had little money and Dickson soon found that the hedonistic lifestyle of the Latham brothers was not to his taste. He therefore turned his attention to development work for the KMCD group (Koopman, Marvin, Casler, Dickson) which he and three friends had set up at the end of 1894. This eventually became the American Mutoscope and Biograph Company, and a formidable rival to Edison's own film interests. (The Biograph was a projector using wide-gauge 68 mm film, and the Mutoscope was a viewing device utilising bromide prints in a 'flick-book' principle). Dickson was not offered a senior management position with the company when the development work had ended, and instead became a travelling cameraman, an occupation he followed for the next five years. During 1896 and the early part of 1897 he filmed in various parts of the United States, and in May 1897 came to England to take up an appointment as technical manager and cameraman for the newly-formed British Mutoscope and Biograph Company. Using London as his base, he travelled widely throughout Britain and Europe providing a steady stream of product for the British company and the International group. In October 1899 he went to South Africa to cover the Boer War, and despite many difficulties and dangers managed to obtain a number of successful scenes of war damage, troop movements and camp life. During this campaign he kept a diary, and this was published on his return to England as The Biograph in Battle. It is a unique and valuable account, the first book published by a film cameraman, and of exceptional interest and veracity from having been compiled on the spot while the events it records were taking place.Dickson left British Biograph about 1903 and by 1906 had established himself in London as an electrical engineer.

Assessments of the relative contribution of Dickson and Edison in the important work done at West Orange between 1888 and 1894 have varied widely. In his old age Edison, perhaps not surprisingly, regarded Dickson as disloyal andrefused to have anything to do with him even though Dickson tried to re-establish contact. Inevitably Edison's attitude affected accounts such as Ramsaye's which were written in the Inventor's lifetime. A completely different perspective was offered by Gordon Hendricks in the 1960s. Making extensive use of the Edison archive, Hendricks argued that Dickson had been a victim of Edison's ruthlessness and love of fame, and that his true contributions had been overlooked or even suppressed. More recently it has been suggested by Charles Musser that Hendricks' criticism of Edison lacks objectivity, and that his conclusions are suspect. Utilising an approach which he terms 'critical sympathy', Musser has carefully re-examined the evidence, but it seems unlikely that a finally accepted judgement of Dickson has yet been achieved. A concentration on the personalities of either Dickson or Edison is in any case misleading, for the motion picture work done at West Orange was essentially a co-operative team effort rather than the result of individual inspiration. In common with both the Lumière and Biograph organisations, successful product development emerged from the background of a well-capitalised, and large scale industrial manufacturing environment, and the final result represented a synthesis of previous work by other pioneers rather than one all-important 'invention' made by a sole worker - however brilliant. While company employees such as Dickson may have done much of the day to day work, what they achieved was only possible because of the first-class facilities available, and Edison's willingness to spend considerable sums of money on his research and development function. W.K-L. Dickson died of cancer at Twickenham, London on 28 September 1935. He was twice married and had one (adopted) son.

W.K-L. Dickson, The Biograph in Battle: Its Story in the South African War (1901, reprinted Flicks Books 1995)

Raymond Fielding, A Technological History of Motion Pictures and Television (1967) [contains a reprint of an important late account by Dickson, 'A Brief History of the Kinetograph, the Kinetoscope and the Kinetophonograph' (1933)]