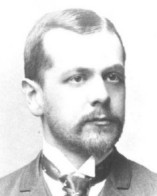 E.J. Dupont was born in Vienna in 1861. He seems to have been one of the most wide-ranging of the Lumière concessionaries. It is not known just what limits applied to his representation of the Cinématographe, but certainly he is identified closely with exhibitions throughout central Europe. His main base of operations was Austria, where the businessman had been active in 1894-5 representing a variety of French goods. Returning to Vienna in March 1896, he gave a private showing of the Lumière Cinématographe at the K.K. Lehr- und Versuchsanstalt fur Photographie on the 20th, before giving a further demonstration at the French embassy and opening to the public in the mezzanine of the house at Kartnerstrasse 45 on the 27th, where Kaiser Franz Joseph I visited the shows on April 17. His agent Goldschmidt opened the Cinématographe at the Casino in Karlovy Vary on 15 July, and another agent, Hermann Arlet, demonstrated the apparatus at the court of Saxony Hotel in Prague on 2 October, opening to the public the next day. Dupont is himself reported to be the operator for an opening at the town theatre in Cracow beginning 14 November and continuing for four weeks. Although the exploitation of the Cinématographe in Germany was the exclusive right of the Stollwerck company, Dupont is also reported as having supplied a machine and operator, after first refusing, to Carl Gabriel in Munich in July 1896. Dupont is a subject for further research; his wide-ranging activities in Austria, the Czech lands, France, Germany and Poland, indicate an informaility, and perhaps a looseness of definition in the Lumière territorial system that needs further examination. Further research is being conducted into Dupont's later career. He is known to have been made a Chevalier de la Légion d'Honneur in 1904. He lived in Austria until 1913, and then moved to France. He died at Kremlin Bicetre, near Paris, in 1943