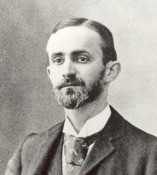 Born on 12 July 1854 at Waterville, New York, Eastman became a clerk-bookkeeper in the Rochester Savings Bank, Rochester, New York, USA. He took up photography in 1877 and experimented in coating new gelatine dry plate emulsions onto glass plates. He was soon so successful that he decided to go into commercial manufacture. He devised a machine to simplify the coating of plates, and travelled to England in July 1879 to patent it. In April 1880 he began manufacture and formed The Eastman Dry Plate Company on 1 January 1881. In 1884 the company became a corporation, the Eastman Dry Plate and Film Company and Eastman, with the camera maker William H. Walker, designed a roll-holder suitable for most plate cameras, in which the heavy glass plates were replaced by a roll of emulsion coated paper. Eastman designed and patented a coating machine for the large-scale production of the paper film, bringing costs down dramatically. The roll-holders were acclaimed by photographers world-wide, and the flexible paper film was welcomed by experimenters in sequence photography. The Kodak camera was launched in June 1888, holding paper film sufficient for 100 exposures, and bought ready loaded. After the film had been exposed, the camera was returned to Eastman's factory where the film was developed and printed. The Kodak camera put photography into the hands of the countless thousands who wanted photographs without complications. Eastman's marketing slogan neatly summed up the advantage: 'You Press the Button, We Do the Rest.'

The Kodak camera was the last product in the design of which Eastman was personally involved. His company grew rapidly, and he acquired the most talented scientists and technicians available. New products emerged regularly - notably the first commercially produced celluloid roll film for the Kodak cameras in 1889. Celluloid - a new plastic material in search of useful applications - had been proposed as a photographic medium by the Rev. Hannibal Goodwin (1822-1900) in 1886. This key innovation made possible the introduction of cinematography a few years later. Over the years the Eastman Kodak Company grew into a giant multinational corporation with manufacturing and marketing organisations throughout the world, responsible for many major advances in photography. Eastman continued to guide the company, pursuing an enlightened policy of employee welfare and profit sharing decades before this was common in the industry, and made massive donations to many educational concerns. He withdrew from the day-to-day control of the company in 1925, and on 14 March 1932, suffering from a painful terminal cancer, he tidied up his affairs and shot himself through the heart, leaving a note: 'To my friends: My work is done. Why wait?'