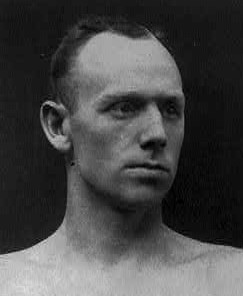 Born at Helston, Cornwall, the distinctively freckled Bob Fitzsimmons moved to New Zealand as a boy. His first fights were in New Zealand and Australia, but he moved to America in 1890, defeating Jack 'Nonpareil' Dempsey to become world middleweight champion in 1891. He worked his way up to heavyweight bouts, knocking out Peter Maher, briefly Jim Corbett's successor as world champion, in the first round on 21 February 1896 (dark skies and rain had already ruined Enoch Rector's attempt to film the fight) before challenging Jim Corbett for the world championship at Carson City, Nevada on 17 March 1897. The film of this match, covering all fourteen rounds before Fitzsimmons knocked out Corbett, was taken by Enoch Rector for the Veriscope Company and aroused considerable interest and controversy, being shown widely throughout the States and abroad. For two years after his victory Fitzsimmons controversially fought no-one but instead toured the country with his theatre company. When he returned to the ring it was to lose to James Jeffries in 1899. Fitzsimmons fought on, becoming world light heavyweight champion in 1903, later fought Jack Johnson, before retiring and returning to the stage.