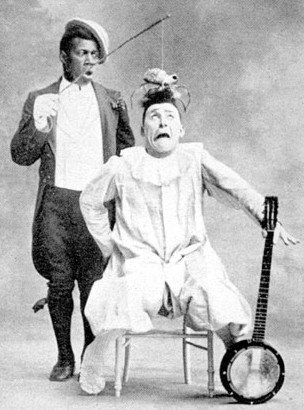 English clown Footit (sometimes spelled Foottit, or Footitt), real name George Tudor Hall, born in Manchester in 1864, trained as an equestrian acrobat with his father's circus, and by 1880 his appearances with Sanger's Circus established him as a leading horseback clown. His double Raphaël (or Rafael) Padilla, known as Chocolat, also known as Raphael de Leios, was born a slave in Cuba in 1868. Orphaned, the boy was sold to a Portuguese merchant as a farmhand in Spain. At 14 he fled, and the white-face clown Tony Grice found him on the Bilbao docks. Impressed with his physical strength and his dancing skills, Grice became his partner in some circus turns at Cirque Medrano. Nicknamed ‘Chocolat’, Padilla was first noticed in a sketch where he rode an uncontrollable mule.

Padilla then made his decisive encounter with George Footit, a partnership that lasted twenty years, flourishing throughout the 1890s and early 1900s at the most fashionable Parisian circus, the Noveau Cirque. The duo'’s routine was between an authoritarian white Clown, and a stupid poor Negro, Augustus, who at the end of each skit receives a correction: "Mr. Chocolate, I'm going to have to hit you ... ". Their slapstick antics, in which Chocolat was the perenial victim of the violent, but impassive Footit, were popular with all levels of society, attracting the attention of many intellectuals and artists. Off stage, Chocolat was full of grace and self-assurance; onstage, ‘'a docile, stupid whipping-boy'’.

A Photoscenograph film of their sketch Guillaume Tell provided the basis for a coloured photo-band projected at Emile Reynaud's Théâtre Optique in the Musée Grevin in August 1896; a few images survive. They were also filmed by the Lumière Cinématographe around 1899, in five (extant) shorts: La chaise en bascule, Boxeurs, Acrobates sur une chaise, Le Policeman, and La mort de Chocolat. Their early sound film productions Entrée des échasses and a version of their skit Guillaume Tell (1900) were restored in 2012 as part of the compilation Phono-Cinéma-Théâtre: Visions animées des artistes célèbres. In 1905 the duo'’s Noveau Cirque contract was not renewed, the Dreyfus affair having had the effect of politicizing racial issues. Their joint career experienced its swan song at the Folies-Bergère, and they parted in 1910.

Footit appeared on the stage, made an unsuccessful attempt to start his own circus, and then ran a bar in Paris. Chocolate, meanwhile, tried his luck as an actor before returning to the circus with his adopted son Eugene Grimaldi, but without success. He died an impoverished alcoholic in Bordeaux, aged 49. Raphaël ‘'Chocolat’' Padilla was painted, drawn, sketched many times by Toulouse-Lautrec (‘'Chocolat dancing in a bar’'), celebrated by Colette (in the novel Gigi ), posed for advertisements (Hève Soap), and some say was Samuel Beckett’'s inspiration for the slave Lucky in Waiting for Godot. Historian Gerard Noiriel remarks: 'The duo symbolized the relationship between whites and blacks at the time. It was a representation of colonial domination'.