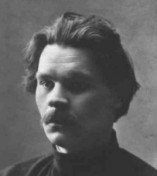 One of the first Russian writers to comment on moving pictures and later an important literary influence on Soviet cinema, Aleksei Maksimovich Peshkov (who took the pen-name of 'Maksim Gorky') was born in Nizhny-Novgorod, which was renamed in his honour after his death. Gorky saw the Lumière presentation organised by Charles Aumont at the annual Nizhny-Novgorod All-Russian Exhibition on 30 June or 1 July 1896 (the show had opened on 22 June), and on 4 July published an evocative account (signed 'I.M. Pacatus') in a local newspaper which has become the most famous of all early literary responses to film ('Last night I was in the kingdom of the shadows'). After a second article for an Odessa paper, Gorky wrote a short story, 'Revenge', based on the death of one of Aumont's 'show girls', which links a prostitute's suicide with seeing the 'normal family life' of the Lumière film Repas de bébé. After his return from voluntary exile in the 20s, Gorky was proclaimed the model for all Soviet art and his doctrine of 'socialist realism' became mandatory for writers and film-makers alike. His play The Lower Depths, originally a Moscow Art Theatre success in 1902, was filmed by Renoir in 1936, and his autobiography inspired three widely-circulated films by Mark Donskoi, The Childhood of Gorky (1938), Among People (1939) and My Universities (1940). In 1955, the Moscow studio which had been Ermoliev's and Mezhrabpom-Rus was named after Gorky.

Harding and Popple, In the Kingdom of Shadows (1996)

Who's Who of Victorian Cinema: A Worldwide Survey.