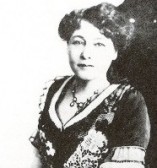 Alice Guy was the youngest of four daughters of a Parisian businessman. She spent part of her early childhood in Chile before being educated in Paris. Her father died when she was quite young, and she saw shorthand typing as a means to financial independence. It was through her mother's charity committee work that Guy met Léon Gaumont in 1895 and was taken on by him as a secretary. Gaumont was expanding from the construction and marketing of projectors to a full film service, which meant producing films (mostly actualities). The degree to which Gaumont used his enterprising secretary to assist in the production of such films is a matter of controversy. Guy's statement in her autobiography that her first film was made in 1896 is not supported by any primary source, and recent research by Maurice Gianati suggests that she did not direct her first film until 1902, though she is likely to have scripted or otherwise assisted in the production of Gaumont films from 1897 onwards. In truth, this is a period when the concepts of 'director' or film authorship are anachronistic. One should acknowledge her undoubted presence at the heart of pioneering film production in France rather than identify some films as being 'hers' when there is no certain evidence to confirm this.

From 1902 the evidence is clearer. She became a highly active producer at Gaumont, responsible in particular for scores of short sound films made using the Chronophone sound process. Initially the greater part of Gaumont production was actuality film (including many dance films), but from 1903 there was an increasing emphasis on fiction. The films grew longer and Guy produced such comparatively ambitious titles as L'Assassinat du Courrier de Lyon (1904) and Esmerelda (1905), based on Victor Hugo's The Hunchback of Notre Dame. She brought a distinctive female view to some of her work, such as in Madame a des envies (1906), in which a pregnant woman has food cravings. Towards the end of her time at Gaumont she saw in a strong team of new filmmakers, notably Victorin Jasset (who designed her ambitious and distinctive La Vie du Christ of 1906) and Louis Feuillade. In 1906 however she married Anglo-French Gaumont cameraman Herbert Blaché and went with him when he was sent in 1907 to manage the Gaumont office in New York.

In 1910, having given birth to a daughter and keen to return to filmmaking, Guy-Blaché (as she now became) founded her own production company, Solax, minor but lively producers on the American scene for three years, with Guy-Blaché directing many films herself, notably A Child's Sacrifice (1910) and Dick Whittington and his Cat (1913). On being released from his Gaumont contract in October 1913 Herbert Blaché replaced Solax with Blaché Features, moving on to form the US Amusement Corporation in April 1914. For both comapnies Guy-Blaché directed several films, now of feature length. From 1914 to 1917 she also made features starring Olga Petrova for Popular Players and Plays, another Herbert Blaché company. The Blachés were divorced in 1922, Alice returning to France, but she failed to find further employment in the film industry. She wrote some children's books, but the remainder of her life was spent in obscurity until the French government bestowed on her the Legion d'Honneur in 1953. She returned to the United States in 1964 to live with one of her daughters and died in a nursing home in Mahwah, New Jersey. As interest in early women filmmakers continues to grow Alice Guy has become an important figure in an alternative history of the cinema. More is being found about every aspect of her remarkable career, and her reputation continues to soar.