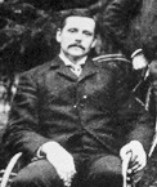 Harry Marvin, a college teacher, had met W.K-L. Dickson in the 1880s, and in 1894 Dickson, then still working for Thomas Edison and also involved with the Lathams, proposed to Marvin a flip-card device that would compete with the Kinetoscope. Elias Koopman, Herman Casler, Marvin, and Dickson called themselves the KMCD group to develop the idea, the Mutoscope viewer patent being applied for in November. Soon Casler had constructed a large-format camera, and the first test in June 1895, probably shot at the Syracuse engineering workshop of Casler's employer C.E. Lipe, showed Marvin and Casler in a mock sparring match. In June 1895 Harry Marvin obtained sufficient finance to open the Marvin Electric Rock Drill Works in Canastota, New York, for the manufacture of rock drills based on his patent. Casler was superintendent, and worked on his motion-picture experiments on the same site. On 22 September, the group met at Marvin's home in Canastota, where a group portrait was taken, and it may have been at that time, due to the drop-off in the peepshow motion picture business, that it was decided to develop a projector. In December the group formed the American Mutoscope Company (later American Mutoscope and Biograph, usually referred to as Biograph), which would become one of the leading producers and exhibitors in the field, with a British associate company.

In December 1896 Edison successfully appealed against the Patent Office rejection of his (Edison's) camera patent, offering a new set of specifications. Harry Marvin claimed that the new specifications were for an entirely different invention, but this claim was thrown out on a technicality. Later, Marvin suggested that fraud had been involved. Discouraged by low profits and Biograph's comparative success, Edison contemplated selling his motion picture business to Biograph for $500,000. On 12 April 1900, Harry Marvin paid Edison a $2,500 option, but the deal fell through. In July 1901 the Edison company were about to be granted an injunction against Biograph, because of claimed patent infringement, but following a deposition by Marvin that such an injunction would 'bankrupt and utterly ruin our company' a stay was granted. In March 1902 Edison's case was dismissed, and all Edison's key motion-picture patents declared invalid. Marvin stayed with Biograph throughout the Motion Picture Patents Company years, and was the man who as vice-president and general manager of the company decided Biograph actor D.W. Griffith would make a useful director (on the suggestion of his brother Arthur Marvin, a longtime Biograph cameraman). It was the conservative production policies of Marvin and the Biograph board, frustrating Griffith's wishes to make longer films, that eventually sent him elsewhere to greater things. In 1912, Norton's son Daniel drowned on the Titanic.