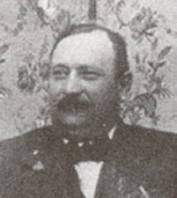 Hatot worked at the Hippodrome Theatre, Paris, where he directed crowd scenes. In 1896 he directed the first of several comic and dramatic films he would make for the Lumière firm until 1901, including the thirteen scene Passion Play La Vie et la Passion de Jésus-Christ (1897), with the pantomime actor Bretteau playing Christ. His dramas included a succession of famous deaths: Execution de Jeanne d'Arc, Assassinat du Duc de Guise, Mort de Marat and Mort de Robespierre (all 1897); his comedies, or records of various comic stage acts, included the celebrated Footit and Chocolat. Hatot's early film output is a useful reminder that Lumière did not only produce actuality film. He subsequently directed dramas for Pathé before in 1906 joining the new company Eclipse, a French off-shoot of the Charles Urban Trading Company, where he formed a team with former Gaumont designer and director Victorin Jasset. The pair moved to Eclair in 1908 where they specialised in film series with regular characters (for example, Nick Carter) and produced some films in North Africa.