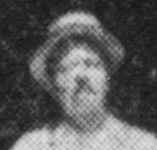 William Heise was W.K-L. Dickson's 'right-hand man' in the development of the Edison Kinetoscope. Listed in the account books for 1890 Kinetoscope work as 'machinist' - he made the first experimental film perforator for Dickson - Heise went on to take an important part in the development of the first succesful motion picture system. He operated the Kinetograph camera for many filming sessions from the earliest days, and can be seen in several photographs relating to Kinetoscope production, and as Black Maria studio cameraman in drawings in The Century magazine (June 1894) and Frank Leslie's Popular Monthly (Feb 1895). He also has the distinction of appearing in what researcher Hendricks has called 'The first "modern" motion picture in America', shaking hands with Dickson in a brief test that was reproduced in The Phonogram in October 1892. When Dickson left Edison's employment in April 1895, Heise continued to produce films for the Kinetoscope and later the Vitascope, including a number of artistes from Barnam & Bailey's Circus in May that year, and the popular cameo the May Irwin Kiss of 1896. From May 1896 Heise was able to use a newly-constructed portable camera, and Edison film production was freed from the constraints of the Black Maria. Scenes of Herald Square, Central Park, and the Elevated Railway, 23rd Street, New York, were among the first subjects, followed by sequences taken on a trip to Niagara falls, scenes at Coney Island, short comedies and military subjects. Working with new head of the filming department James White, Heise continued as an Edison cameraman, filming many subjects (some of them imitations of popular Biograph and Lumière films) such as the train film The Black Diamond Express, and embarking on a major expedition to record President William McKinley's inauguration. With White off around the world for ten months in 1897/8, Heise produced twenty-five copyrighted subjects, including winter scenes in February 1898. He left Edison's employ in October that year, though he was shortly to return in a non-film role.