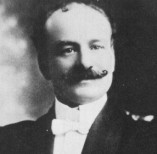 One of several famous magicians who were to add films to their repertoires during the early years of cinematography, Carl Hertz was born in San Francisco and after becoming proficient in the art of magic, toured America and Europe appearing in various music halls. Like David Devant, the popular conjuror of the Egyptian Hall, Piccadilly, Hertz acquired one of the first Theatrograph projectors made by Robert Paul, and took it with him on his tour of South Africa and the antipodes. He had sailed from England on 28 March 1896 aboard the Royal Mail Steamer Norman and during the voyage had exhibited the Theatrograph to the passengers. He was thus probably the first person to have shown films at sea. On arrival in South Africa, Hertz gave a press show at the Empire Palace of Varieties, Johannesburg on 9 May and two days later, on the 11th, he gave the first public screening of moving pictures ever to be held in that country. The films shown on that occasion included Highland Dances, Street Scenes in London, Trilby Dance, Military Parade and the famous Soldier's Courtship which Paul had shot on the roof of the Alhambra Theatre, Leicester Square in April. This little comedy must have been sent out to him by Paul, after Hertz had left England. Hertz visited various towns in South Africa and then went on to Australia, which he had first visited in 1892. Here he showed the Theatrograph to an invited audience at the Melbourne Opera House on 17 August 1896, and five days later, on the 22nd, gave the first public performance to a paying audience at the same venue. This was the first time that films had been seen by the general public in Australia if we discount the films previously exhibited in the Edison peepshow Kinetoscope. After Australia he took his magic and Theatrograph to Ceylon (Sri Lanka), India, China, Japan, the Fiji Islands and Hawaii. In 1924 he published his autobiography. As far as is known, Hertz never appeared in any films, but he deserves to be remembered in the history of the cinema as an important factor in bringing films to a wider audience throughout the world, which hitherto had not witnessed this enthralling spectacle.

Erik Barnouw, The Magician and the Cinema (1981)