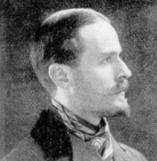 Born into a prosperous Chicago family, as a boy E. Burton Holmes gave magic shows to family and friends. As a young man, he toured the United States and overseas, making lantern slides from his photographs of the trips. Slides of an 1890 visit to Europe were shown at the Chicago Camera Club, of which he was secretary. After this success he gave a public performance, Through Europe with a Kodak, to aid club funds. The lectern lamp failing midway, his ad-lib performance proved more effective and he later worked without a script. Sophisticated and elegantly tailored, his stage appearance was striking and his delivery 'crisp'. Returning from a trip to Japan in 1893, he decided to become a professional lecturer, with Oscar B. Depue as lantern operator, but found that his local success with the Japan lecture - and a later lecture based on an 1895 cycle tour of England, France, Italy and Switzerland - was not repeated elsewhere, and he continued lecturing with only patchy success. In the summer of 1897, Depue bought a Gaumont camera in Paris and began making moving pictures, first shown as a tail-piece to Holmes's slide lectures, with the camera modified as a projector. From 1899-1900, interespersed at relevant moments throughout the shows, the films - including the Grand Canyon and the Hopi Indians' snake dance, shot on a home-made successor to the Gaumont camera - became increasingly important. Depue constructed a new 60 mm projector and another camera in 1899, the latter used on a 1901 world tour taking in Siberia, China and Japan, but in 1902 abandoned the bulky 60 mm format for a more convenient 35 mm Warwick Bioscope camera from Charles Urban. Holmes and Depue made many expeditions in the succeeding years; to Norway, Alaska, Egypt, Greece and elsewhere. In 1904 Holmes coined the term 'travelogue', and a contract with Paramount (1908-1922) resulted in several years of weekly travelogue releases in Paramount Theatres. Burton Holmes continued to lecture until shortly before his death in 1958.