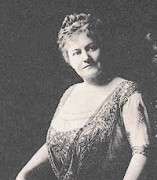 Born Ada Campbell in Canada, she made her vaudeville debut in 1875. After her double act with her sister broke up in 1883 she played comedy roles in the legitimate theatre, returning to variety in 1887 in a series of farcical sketches. From the mid-1890s she starred in stage comedies, often introducing ragtime songs such as A Hot Time in the Old Town Tonight. In April 1896 she was persuaded by Edison's agents Raff and Gammon to appear with John C. Rice in a filmed scene from their Broadway success The Widow Jones. Although The May Irwin Kiss lasted for only fifteen seconds, the close-up sequence caused immense enthusiasm, and an almost equal degree of disapproval, when shown by the Vitascope at music halls throughout the United States. May Irwin made her last stage appearance in 1922, having made at least one further screen appearance in Mrs Black is Back (1914). Her partner in what Terry Ramsaye described as a 'high vacuum kiss' also appeared on screen again, playing a lady dentist's patient in Biograph's The Kleptomaniacs (1900).