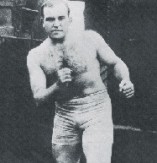 Born in Carrol, Ohio, Jim Jeffries moved to California in 1881 and remained there to the end of his life. Originally an iron worker, he took up boxing in 1896 with a success that owed more to brute force than sporting finesse. Having been Jim Corbett's sparring partner for the 1897 world heavyweight contest, he won the championship over Bob Fitzsimmons in 1899, an event filmed in part by Vitagraph before their arc lights burned out. Jeffries defended the title to 1903, retired the following year, then made a comeback (as one of the much sought 'White Hopes') in 1910 when he was heavily defeated by Jack Johnson. His successful defence of his title on 3 November 1899 against Tom Sharkey at the Coney Island Sporting Club, organised by William Brady, was filmed in its twenty-five round entirety by the American Mutoscope and Biograph Company, the first fight to be filmed successfully by artificial light. Filming at night by the light of 350 miniature arc lamps (and pirated on the night by Albert Smith filming for Vitagraph), Biograph employed four cameramen: F.S. Armitage, Billy Bitzer, Arthur Marvin and Wallace McCutcheon. A 'fake' renactment, as was becoming common, was also produced by Lubin.