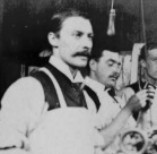 Early in the history of film production and presentation some inventors, familiar with glass slide projection and considering inflammable and fiddly celluloid ribbon unsuitable for non-professional cinematography, devised machines that used glass plates to photograph and project moving images. The most successful of these was the Kammatograph, advertised as the 'filmless cinematograph', invented and manufactured in London by Leo Ulrich Kamm, whose factory was at 27 Powell Street, Cromwell Road, London. The machine used a thin glass disc twelve inches in diameter, with a snail-type gear acting on the notched edge of the disc receptor to provide intermittent movement. In addition, a worm gear moved the disc horizontally, slowly and continuously, as the images were exposed, to produce a spiral row of pictures. The mechanism was enclosed in a wooden box (essential for use as a camera), and for projection the box was placed in front of a lantern, the same tracking arrangement keeping the spiral of images in line with the aperture, lens and light source. Patented in 1898 (BP 6515), the machine was sold for a few years from 1900. There were two models: one with 350 pictures, giving approximately thirty seconds of running time; the other, with 550 smaller pictures, forty-five seconds. As easy to develop as any photographic plate, the positive for projection was very simply produced by contact printing. Various collections contain Kammatograph discs, an as-yet unexamined source of century-old motion pictures. Kamm, who was born in Bavaria, and his son Laurence, continued in the image projection business for many years, making professional film projectors with patented improvements and, later, graphic enlarging machines for technical drawing offices.