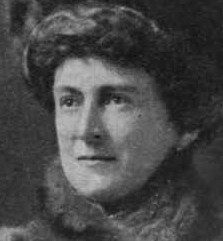 A member of the British nobility, born Elizabeth Hawkins-Whitshed, Mrs Aubrey Le Blond (she married her third husband Francis Bernard Aubrey Le Blond in 1900) lived mainly in Switzerland from the 1880s, becoming the first president of the Ladies’ Alpine Club in 1907. She wrote several books on mountaineering and was known as an expert Alpine camera artist (writer E.F. Benson describing her pictures as ‘quite unrivalled’). What turned her towards animated photography we do not know, but certainly she had acquired a camera and had taken some films by early 1900, for her ‘interesting subjects … of snow sports in alpine regions’ are praised in the 1900 edition of Cecil Hepworth’s Animated Photography (Hepworth refers to her under her second married name, Mrs Main). She probably managed to sell some of her films, since ten are listed in James Williamson’s 1902 film catalogue, all taken in the Engadine valley in Switzerland, including St Moritz. These were between 50 and 100 feet each, and included three films of bob-sleigh racing, three of toboganning, and two of skating on the Kulm rink. Few though they may be, these films make Le Blond the world’s first mountain filmmaker, ahead of such pioneers as Frederick Ormiston Smith and Frederick Bullingham, and also one of the first women to make films.

Le Blond evidently did not think her filmmaking of any great significance as she fails to mention it in her autobiography, perhaps because her life encompassed so many other activities: as well as writing and photographing, she lectured, travelled widely, worked in the Service de Santé Militaire in the First World War, and was made a Chevalier de la Légion d’Honneur in 1933.