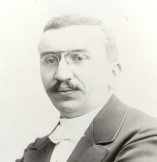 Inventor of the Cinématographe and the Autochrome colour photography process

Born on 5 October 1864, young Louis's education was interrupted by violent headaches, but at home he studied piano, drawing and sculpture. He later worked at his father Antoine's photographic plate factory, contributing significantly to its success. After seeing an Edison Kinetoscope, Antoine suggested that they work on developing a motion picture system. Louis's brother Auguste attempted to design a camera but with little success, until Louis suggested a mechanism like that used in a sewing machine to advance the cloth step by step. Although Auguste gave credit to Louis, the successful machine was patented in France on 13 February 1895 in the name of both brothers, in common with their other inventions. The first model was made by their engineer Charles Moisson. The machine was a combined camera, projector and printer and the perforated film was moved intermittently by a form of claw pulldown - a pair of pins which, inserted into the perforations on either side of the film then moved down, carrying the film with them. The cam motion mechanism (improved in a supplement to the patent dated 30 March 1895) formed the basis not only of the Lumières's instrument but of a large number of later mechanisms, some still in use today.

The Cinématographe (a name used earlier by experimenter Bouly) gave its first public presentation in Paris, to the Société d'Encouragement de l'Industrie Nationale, on 22 March 1895. Only one film was available, La Sortie des Usines Lumière (Workers Leaving the Lumière Factory), shot by Louis. It followed a presentation of colour stills, which the Lumières were experimenting with at the time. Other film presentations soon followed; on 17 April at the Sorbonne, and on 10 June at the Congres des Sociétés Francaises de Photographie, by which time there were seven more subjects, including Pêche aux Poissons Rouge and Pompiers: Attaque du feu. Others were taken and shown during the Congress by Antoine. Several more demonstrations preceded the first show to a paying audience in Paris in December. Louis ordered twenty five Cinématographes from engineer Jules Carpentier, followed by an order for a further 200, and within weeks agents took them throughout Europe, America, and within months all over the world, shooting scenes and giving filmshows. Quite soon this policy of appointing official agents rather than selling the device outright was abandoned as other manufacturers made alternatives available. Within two or three years, however, the technical limitations of the Lumière perforated film resulted in it being superseded by the 'Edison' standard. The Lumières continued their photographic developments, including experiments with large film formats. At the Paris Exposition in 1900, the Lumières projected Cinématographe pictures onto a giant screen twenty metres wide. In 1902, Louis opened a Photorama exhibit in Paris, his invention using a band of film and fast-revolving lenses to produce, by means of persistence of vision, a circular, static panorama. The brothers launched their successful Autochrome colour transparency system, the result of many years' experimentation, in 1907. Louis pursued an interest in stereoscopy, first with Photo-Stereo-Synthesis plates - 3-D portraits visually similar to holograms - and in the 1930s stereoscopic films. In 1935 he was feted during the fortieth anniversary of cinema, and the following year flew to London for the celebrations of the anniversary of the the first Lumière film show in Britain. In 1948, shortly before he died, Louis Lumière was interviewed for French television by Georges Sadoul. Bemedalled and proud, the elderly inventor gave a formal account of the origins of the Cinématographe for the audiences of a new world-wide medium.