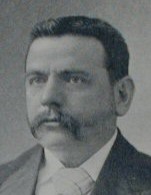 Dr John Macintyre was born in Glasgow and specialised in diseases of the nose and throat at the Royal Infirmary. In April 1897 Macintyre became the first person to combine the two remarkable discoveries of 1895: Röntgen rays (X-rays) and the cinema. In that month he demonstrated X-ray cinematography to the Glasgow Philosophical Society. His subject was the motion of a frog's limbs, which he manipulated mechanically and illuminated with a Crookes tube. His camera was protected by lead foil, the lens removed and replaced with a lead diaphragm with a small aperture. He then filmed the X-rays directly as they passed through the frog's body (a subject chosen for its flatness and thin skin, requiring only a low exposure), and showed the film to his audience in loop-form. One of the screenings Macintyre gave was on the Society's Ladies' Night, with a lay as well as professional audience, intriguingly indicating that he saw his film as being as much an entertainment as a scientific display. There was much interest in Macintyre's work, illustrations of which were published in scientific journals. Similar experiments were also conducted by the Frenchmen Roux and Balthazard in the same year. His film survives, but Macintyre does not appear to have pursued the subject beyond 1897. He was a Fellow of the Royal Society of Edinburgh and the Royal Microscopical Society, a member of the Institute of Electrical Engineers, and a lay member of the Glasgow Art Club.