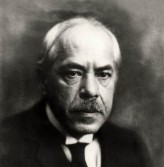 A specialist in the study and treatment of nervous diseases at the Pantelimon Hospital in Bucharest, while working in Paris in 1898 Marinescu had the idea of making use of the cinematograph as a further tool in the investigation of his field. In mid-1898, having previously experimented with chronophotography in his studies under the influence of E-J. Marey, he purchased a Lumière Cinématographe from Paul Menu, and began to film the movements and gestures of those suffering from severe nervous ailments, his first film being Walking Difficulties in Organic Hemiplegia (1898). Typically he would make his patients walk before the camera in four directions against a black background and thereby analyse their movements, before and after treatment. He wrote a number of papers for French medical journals on his work, praising the cinematograph as a tool for medical investigation, and continued this work to 1901 with his assistants C. Parhon and M. Goldstein, and employing cameraman Constantin Popescu, who shot for him such titles as A Case of Hysterical Hemiplegia Cured Through Hypnotic Suggestion (1899), Walking Difficulties Due to Progressive Locomotary Ataxia (1900) and Pseudo-Hypertrophic or Myosclerotic Paralysis Among Myopathies (1901). Other Romanian doctors of the period, A.I. Bolintineanu and Iaon Athanasiu (later a sub-director of the Institut Marey in Paris) were equally enthusiastic about the use of film in medical studies. Marinescu's films of those afflicted with nervous complaints, which survive, show a procession of shuffling figures passing by the camera in a display that is curiously haunting.