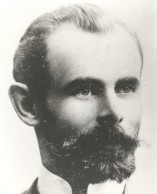 Little is known of Boleslaw Matuszewski outside the period 1895-1901; he was born in 1856 in Pinczow, Poland, he appeared with his brother Zygmunt in the circle around the Warsaw photography studio Paryska Fotografia Lux - Sigismond & Co. in 1895, and his method of fixing photographs in enamel appeared in Paris in July 1901 in the brochure Les portraits sur maux vitrifés. But his activities in his six known years are an important legacy of early cinema. He may have been a Lumière operator and involved in filming the coronation of Tsar Nikolas II (he was certainly one of the Tsar's court cinematographers for a period), and he began making films for Lux-Sigismond by the middle of 1897, including Operacje chirurgiczne w Warszawie, the record of a surgical operation, and Podroze, uroczystosci i polowania w Spale i Bialowiezy, scenes of folklore in north-eastern Poland. He arranged many screenings in both Warsaw and Paris; É-J. Marey spoke highly of his work in scientific film in 1899; and the year before he had presented the medical film of Dr Eugène-Louis Doyen in Warsaw. His most significant achievement was an astonishing pamphlet published in Paris on 25 March 1898, Une nouvelle source de l'histoire, in which he not only affirmed his belief in the authenticity, exactitude and precision of the filmed image, but also called for the establishment of a national archive to preserve motion pictures as important evidence of lives and activities, an archive that would have the same authority and standing as the Bibliothèque Nationale. His second booklet, La photographie animée of the same year discusses the applications of the cinema in the fine arts, industry, medicine, education, science, and military life. Remarkably foresighted, to all reports indisputably energetic, Matuszewski made three further folklore films in Poland in late 1898 and disappears from the historical record.