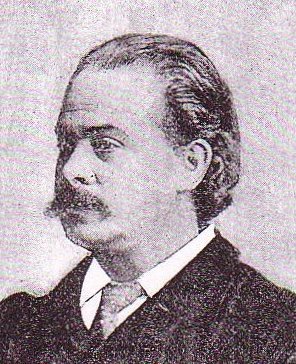 Born in Southwark, London, William Mecham, a professional caricaturist who also gave 'Lightning Cartoon' presentations on the music hall stage, was the first celebrity of any kind to appear in a British film. Mecham started his working life as a seller of paper hangings with his father. By the late ‘80s Mecham’s main work was the vast centre spread in colour of The St Stephen's Review, a weekly magazine of political comment, which folded before his film debut. Thirty-four political lithographs of statesmen of the era are in the collection of the House of Commons. He also published in the London edition of the American satirical Puck Magazine (1889-90).

Birt Acres filmed four separate performances of 'Tom Merry' (Mecham's pen name) drawing personalities famous in his day. Catalogue and advertising titles vary a little, but the main title was probably Tom Merry Lightning Artist Drawing Mr Gladstone (that is, William Gladstone the former Prime Minister). The other three films featured Merry drawing (sometimes 'sketching') Lord Salisbury, the German Emperor Kaiser Wilhelm II, and the German Prince Bismarck. The latter two films would have been made to show alongside Acres' films of the opening of the Kiel Canal. That ceremony was in June 1895, but the first mention of the films of Merry comes later. They were shown as part of Robert Paul's first theatrical programme at the Alhambra on 25 March 1896, and mentioned in several reviews. From this simple beginning sprang the art of the animated cartoon film of today. Less expert artists than Merry took longer to complete their films, and as reels could not at the time be extended, stop-frame photography was introduced to ensure completion within the required minute.

Early in the new century Merry illustrated The History of Canvey Island by Augustus Daly. Published posthumously the dedication reads: 'In memoriam of William Mecham, artist, cartoonist, and caricaturist, better known to the British public by his professional soubriquet, Tom Merry, who died suddenly at Benfleet Station (adjoining Canvey Island), Essex, on Thursday, 21 August 1902, aged 49 years.[’] By a stroke of good luck he remains immortal, a few frames of Mecham / Merry in his Kaiser Wilhelm film being preserved in the BFI National Archive.