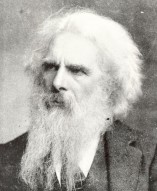 Born Edward James Muggeridge at Kingston-upon-Thames, England, on 9 April 1830, he emigrated to America in 1851, working in New York in book binding and selling. He acquired an interest in photography, which developed after his move to California in 1855, and changed his surname to Muygridge. Recovering from a stagecoach accident he returned to England in 1860, where he apparently learnt the wet collodion process, acquiring the best photographic equipment available. Back in America, in 1867 - under the trade pseudonym 'Helios', and now with the surname Muybridge - he set out to record the scenery of the far West with his mobile darkroom, christened 'The Flying Studio'. He produced notable stereoscopic views, and later, panoramas including an important series showing San Francisco. His reputation as a photographer of the first rank spread, and he was approached by the President of the Central Pacific Railroad, Leland Stanford, to attempt to photograph a horse trotting at speed, to settle a long-standing controversy among racing men as to whether a trotting horse had all four hooves off the ground at any point. In the Spring of 1872 Muybridge photographed the horse Occident, but without any great success, as the current wet collodion process normally required many seconds for a good result. In April 1873 he managed to produce some better negatives in which a recognisable silhouette of the horse showed all four feet above the ground at the same time.

Soon after, Muybridge left his young wife, Flora, to go on a photographic trip. While he was away, she had an affair with a Major Harry Larkyns and became pregnant. Muybridge - an imposing figure in broad-brimmed hat and long white beard - discovering that the child was not his, confronted Larkyns, and shot him dead. Tried for murder in February 1875, Muybridge was acquitted by the jury on the grounds of justifiable homicide; he left soon after on a long trip to Central America. On his return, he took up the action photography project once more. Using a new shutter design he had develped which operated in as little as 1/1000th of a second, he obtained more detailed pictures in July 1877. He then devised a new scheme, which Stanford sponsored at his farm at Palo Alto. A fifty-foot-long shed was constructed, containing twelve cameras side by side, facing a white background marked off with vertical, numbered lines. Each camera was fitted with Muybridge's high-speed shutter, released by an electromagnetic catch. Thin threads stretched across the track were broken by the horse as it moved along, closing spring electrical contacts which released each shutter in turn. Thus in about half a second, twelve photographs were obtained showing all the phases of the movement. Later, twenty four cameras were used; and lateral cameras giving oblique views. Although the pictures were still little more than silhouettes, they were very sharp, and sequences published in scientific and photographic journals throughout the world excited considerable attention. By replacing the threads with an electrical commutator device, releasing the shutters at precise intervals, Muybridge was able to take series of actions by other animals and humans.

Having adopted the final version of his name - Eadweard Muybridge - from 1880 he lectured in America and Europe, projecting his results in motion on the screen with his Zoopraxiscope projector. This machine, described by the Illustrated London News as 'a magic lantern run mad' (with method in the madness)' was basically a projecting phenakistiscope, with a contra-rotating shutter. The silhouette images, derived from his sequence photographs, were painted around the edge of a large glass disc. (Later, translucent coloured paintings were used.) In August 1883 he received a grant of $40,000 from the University of Pennsylvania to carry on his work there. During 1884 and 1885, using the superior gelatine dry plate process and new camera apparatus, he produced over 100,000 sequence photographs, of which 20,000 were reproduced in the Animal Locomotion folios in 1887. The subjects were animals of all kinds, and human figures, many nude, in a wide range of activities. His motion sequences were projected in the Zoopraxographical Hall at the Chicago Exhibition of 1893. The following year Muybridge returned to his birthplace in England; his last publications were Animals in Motion (1899) and The Human Figure in Motion (1901). His influence on the world of art was enormous, overturning the conventional representations of animal movement hitherto used by artists. His work in pioneering the use of sequence photography led to the science of chronophotography developed by Professor E-J. Marey and others, and stimulated many inventors, notably Thomas Edison, to work which led to the introduction of cinematography in the 1890s.

Eadweard Muybridge, Descriptive Zoopraxography or the Science of Animal Locomotion Made Popular (Pennsylvania: University of Pennsylvania, 1893)