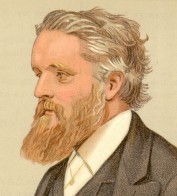 George Newnes was the Manchester representative of a London firm which sold ornaments and home furnishings, when in 1881 he had an instant publishing success by launching a popular magazine of short items called Tit-Bits. In 1884 Newnes moved to London and in 1890 had his second great success with the Review of Reviews, which carried a monthly digest of the principal magazines and journals. Newnes had a passion for new inventions, which brought him into contact with the pioneers of moving pictures. Around 1889 Wordsworth Donisthorpe used his prototype Kinesigraph to take a series of sequential images of Trafalgar Square, and he approached Newnes for the financial backing to develop a viable system of projection. Newnes commissioned two experts, one a magic-lanter maker, to investigate the Kinesigraph, but, as Donisthorpe noted sadly, 'both these "experts" reported adversely ... They agreed that the idea was wild, visionary, and ridiculous, and that the only result of attempting to photograph motion would be an indescribable blur.' Newnes' business continued to flourish with the creation of the Strand Magazine (1891), the Liberal evening paper Westminster Gazette (1893) and Country Life (1897). He was made a baronet in 1895. In 1898 he returned to his interest in moving pictures by investing £2,000 in the newly-formed Mutoscope and Biograph Syndicate. With Arthur Pearson, a successful publisher whom Newnes had first employed on Tit-Bits, and Edward Hudson, the printer of Country Life, Newnes now became involved in plans to develop the Mutoscope peep-show viewer into a medium of news. The Mutoscope and Biograph Company hoped to flood the country with Mutoscopes, and in 1899 its Chairman admitted that 'if there is any value in the shares it comes from the fact that we are going to be a part of the illustrated journalism of this country in the future'. In 1900 the Mutoscope and Biograph Company launched the 'Home Mutoscope', and its Chairman confidently declared that 'the novelty of the illustrated newspaper has worn down a little, and what the public want just now is a mutoscopic or biographic newspaper, in which the reader may see the progress of current events'. However, the Home Mutoscope failed to catch on, and Newnes, who became a Liberal MP in 1900, quickly lost interest in the Mutoscope and Biograph Company, bringing his investment in moving pictures to an end. He appears on film himself in Biograph's Antarctic Expedition - Sir George Newnes' Farewell to Officers and Crew (1898).