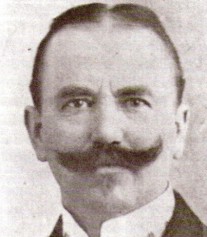 In 1896, Anton Nöggerath Sr. started to show film in his variety theatre Flora in the Amsterdam Amstelstraat, based in the heart of the theatre and cafe circuit at the time. Originally, these were shows given by others: Madame Olinka (October 1896), using the Kinematograph of H.O. Foersterling & Co., and Oskar Messter (September 1897). Possibly through Messter, who was the German and Austrian-Hungarian representative for the Warwick Trading Company, Nöggerath came into contact with this British company. From December 1897, he became the representative for Warwick for Holland, Denmark and Norway. He imported film devices and films from Warwick for distribution in the Netherlands and abroad. Nöggerath thus became the first Dutch film distributor and the most important one in the first decade of Dutch cinema history. Film became a fixed closing number within his vaudeville shows, given the title The Royal Bioscope.

In September 1898, Nöggerath hired a Warwick cameraman to shoot the coronation of Queen Wilhelmina, his first step into film production. Subsequently he produced local actualities and fiction films and showed his films in variety shows all over Holland and Germany. Most films, however, were probably not shot or directed by himself, but by employees like Leon Boedels, Georg Furkel, Johann Vierboom, his brother Carl Wilhelm and his second son Theodore; the films in Rotterdam were probably shot by local cameraman Stefan Hofbauer. The fiction films included a dramatised Boer War scene, Oorlog in Transvaal (War in the Transvaal, 1899), partly shot in Nöggerath’s studio at the roof of the Flora. From his non-fiction films there still survive images from Amsterdam and Rotterdam dating from 1899, Queen Wilhelmina opening Parliament in 1900, the betrothal and the marriage of Queen Wilhelmina and Prince Consort Hendrik in 1901, the visits of Paul Kruger (1900-1901) and of the Boer generals (1902) to Rotterdam and Amsterdam (all held in the Nederlands Filmmuseum), and The Hook of Holland Disaster (1907) (held in the NFTVA). When the Flora burnt down in August 1902, Nöggerath’s fiction films were destroyed. In 1907, Nöggerath opened the Bioscope-Theater in Amsterdam, the first Dutch purpose-built permanent cinema, situated in the same area as the Flora.