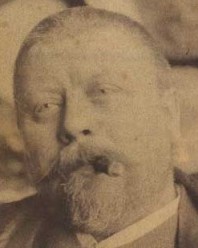 Vilhelm Pacht introduced the cinema to Denmark, when he opened a show of living pcitures at his Panorama on the square in front of the city hall in Copenhagen on 7 June 1896, just a few days before Max Skladanowsky exhibited his Bioscop in the pantomime theatre of the Tivoli Gardens (11 June). A well-known and modern-thinking member of Charlottenborg society, Pacht was a respected painter by the late 1860s, and in 1874 opened Denmark's first printing studio for the production of heliotypes and colour lithographs. He opened his Panoptikon, a 'cabinett' of scientific and natural curiosities and entertainments in 1885, and two years later started a factory which manufactured paint and artists' materials, including the new ready-to-use paint in tubes. He presented gramophone concerts with an Edison Phonograph, and dabbled in a variety of electrical and panoramic attractions. When word of the existence of 'living pictures' reached Denmark, he characteristrically set out on a trip to Berlin, Paris, and London to investigate the phenomenon and see if it could be added to his presentations in Copenhagen. The Lumières refused him a Cinématographe, and Pacht returned with a Kineoptikon of Birt Acres, and with films of Acres and Robert Paul. French sources until only recently had stated that Pacht opened a Lumière Cinématiographe in Copenhagen, but the Lumières had already given the Danish concession to photographer Harald Limkilde, who suddenly decided to open his apparatus on 28 June in Malmo, Sweden, on the occasion of an industrial exhibition; the Cinématographe never appeared in Copenhagen. The Danish Royal Family visited Pacht's screening on 10 June; on 18 June Pacht's tent was burned to the ground, with the loss of his apparatus and films, as a result of an arson fire started by an electrician Pacht had dismissed. The show was reopened with a new Acres machine and new films on 30 June, and the Kineoptikon remained an occasional attraction at Pacht's Panoptikon through 1900. Well-established in Copenhagen, Pacht continued to run his various establishments, and to teach painting at the art school until his death in 1912.