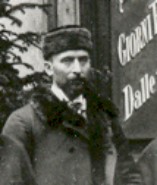 Promio, from a Lyon family of Italian descent, was assistant to a Lyon optician named Boulade when he (supposedly) witnessed the first presentation of the Cinématographe at Lyon on June 1895. The new phenomenon greatly excited him and on 1 March 1896 he left his job and was taken on by the Lumière firm, by then seeking to expand its business worldwide. With M. Perrigot he became responsible for the training of the Cinématographe operators who were to exhibit the machine the world over. Promio was not to spend overmuch time in Lyon, however, as he himself was to become one of the most widely-travelled of the Lumière team over the next two years. First journeying to Spain in April 1896, he introduced moving pictures to that country on 13 May at a private screening organised for the French ambassador and other dignitaries at the Hotel Rusia, 36 Carrera de San Jeronimo, Madrid, followed by a public screening at the same location on 15 May. He further exhibited in Spain, photographing local scenes and thus swelling the Lumière catalogue as he was to do throughout his journeys. Following a private screening for the Queen of Spain on 12 June in Madrid, Promio is next recorded in Russia on 7 July when he gave a film demonstration for Tsar Nikolas II and the Tsarina in St Petersburg. At this same period he also seems to have visited England, Italy, Germany and Hungary. He was a member of the Lumière team that set out to conquer the United States, arriving early September 1896 and filming several scenes along the East Coast, in answer for a demand for American Lumière scenes. He left on 25 September (the negatives were developed in France), then moved on to Italy when he probably took the famous travelling shot from a Venice gondola, since claimed as the first time that anyone had moved the camera.

In March 1897 Promio was in Egypt, followed by Palestine (then part of the Ottoman empire), filming scenes in Jaffa and Jerusalem in April before travelling on to Turkey. He took scenes in Belgium en route to Sweden in May 1897 for the filming of the arrival of King Oscar to the Stockholm exhibition in honour of his Silver Jubilee, also training local operator Ernest Florman. Returning to Russia and St Petersburg he then covered the arrival there of President Fauré of France on 23-25 August. He returned once more to Lyon (possibly visiting Belgium), but was filming in England (and probably Ireland) in late September, presenting the results on the new Lumière Triograph projector at Gatti's music hall, London in October, together with George Francis. By 1898 Promio's travels were largely over, and he settled in Lyon, still in the employ of the Lumière firm. He claimed to have filmed at Queen Victoria's funeral on 1 February 1901, but soon after had left Lyon and the Lumieres entirely. Information on Promio's later career is sketchy. In 1907 he was making films for Pathé; in 1914-15 he saw military service. After the war he became photographer and cinematographer to the Algerian government. He died on Christmas Eve 1926. Promio was, in Rittaud-Hutinet's words, 'une sorte de dandy globe-trotter', always staying in the best hotels, tipping (or bribing) lavishly, and revelling in the high society that was briefly attracted to the new phenomenon of moving pictures. Though such a well-known figure, there is little actual biographical information on him and much confusion in existing sources. Even his correct forename has long been a puzzle. Jean-Claude Seguin-Vergara has shown persuasively that his full name was Jean Alexandre Louis, that he was known as Alexandre, and that all other names under which he is reported, such as Eugène, Georges and Albert, are a fantasy.