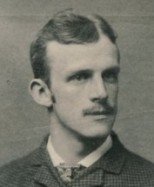 D.W. Robertson began his career in entertainment in 1878 as a touring musician in the New York area, playing the Tumbleronicon, an instrument apparently of his own invention employing wine glasses for their musical effects. After tours to Europe, in the 1880s he moved into management, organising concerts through his New York and Brooklyn Entertainment Bureau, serving church groups and small opera houses. In 1897 he turned his attention to motion pictures, acquiring an Edison projecting Kinetoscope, which he billed as the Projectoscope. Robertson focussed his programmes with great success on the religious groups and schools that made up the Chautauqua circuit (popular adult education events of the day which combined entertainment with education and preaching). His career is indicative of the importance of venues for motion pictures outside the variety theatre circuits, as part of a mixed programme of entertainments, before the emergence of the nickelodeons. Gregory Waller describes a Robertson show thus: 'In 1899, for instance, his opening night performance at various Chautauqua assemblies began with a piano solo, followed by two ballads illustrated with slides ("Mid the Green Fields of Virginia" and "The Girl I Love in Sunny Tennessee"), both sung by M. I. Colgan. Colgan also presented a "monologue," entitled "A Happy Pair," which was "illustrated throughout by the Projectoscope."... The evening's entertainment concluded with a series of moving pictures, including Cinderella, several war pictures, and what was billed as The Man in the Moon at Close Range.' (This indicates that Robertson was showing Georges Méliès films). By 1905-06, Robertson had five motion picture outfits on the road. As the cinema age was ushered in, he continued putting on mixed entertainments for churches, clubs, lodges, schools and Chautauqua assemblies for a number of years thereafter.