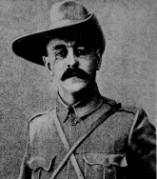 Joseph Rosenthal was of a humble Jewish background in east London, working as a pharmaceutical chemist, before joining the Maguire & Baucus company in 1896, for whom his sister, Alice already worked as a film stock keeper. When Charles Urban formed the Warwick Trading Company out of Maguire & Baucus two years later, Rosenthal was sent on filming assignments, first in Europe and then as far afield as South Africa. The following year he was sent to the latter country twice again, first to record the voyage of the ship en route, and then to cover the Boer War which broke out in October. This was an assignment which made Rosenthal's reputation. Arriving in January 1900, he initially went to the Natal front, before joining the rising star of General Roberts' column pushing north from the Cape. Travelling with two mules and a cape cart, he could move relatively fast, sometimes even going ahead of the troops. He filmed several scenes around Bloemfontein, including Hoisting the Union Jack and The Balloon Contingent, though these and other films were lost when the ship carrying them back to England went down. However, other films arrived safely and showed such scenes as British troops on the march and fording rivers, and even included Boer Prisoners Under Escort. Camerawork could be a risky business: in filming one river crossing, Rosenthal records that 'a shell exploded right in front of me, and it was very lucky indeed that I was not hit'. He was present at the various British victories which came in the second quarter of 1900, managing to film the surrender at Kroonstad in May, and the raising of the British flag over Pretoria the following month. To most people this seemed to be the end of the war (it was to continue until May 1902), and Rosenthal departed, leaving cameraman Sydney Goldman as Warwick's representative in South Africa.

Rosenthal's next assignment took him to the Far East: leaving London in August, he arrived too late to film any action in the Boxer Rebellion, but managed to record some battle incidents in the American colonial conflict then taking place in the Phillippines. From 1901 he was in safer environs: firstly filming the opening of the Australian parliament by the Duke and Duchess of Cornwall and York in May, and then in 1902 making a variety of films for the Canadian Pacific Railway, including what may have been his first venture into drama with a version of Hiawatha enacted by the Ojibwa people. But a return to danger followed in 1904, when Rosenthal was sent to cover the Russo-Japanese war, some of which he had to film from behind the protection of a special camera shield: his films of the gruelling siege of Port Arthur were shown throughout the world. After the war ended, Rosenthal stayed in the Far East and Borneo for some time, before proceeding to India to film the Prince and Princess of Wales' tour at the end of 1905. But at this point in his career he was dismissed by Charles Urban, and in 1908 set up his own company, Rosie Films, based in Croydon. He tried his hand at comedy directing at this time, but it was no great success, and he concentrated on shooting documentary films for the rest of his career which continued through the First World War. Rosenthal had an adventurous life, and pioneered the kind of professionalism which would be much valued in the film industry in the years ahead.