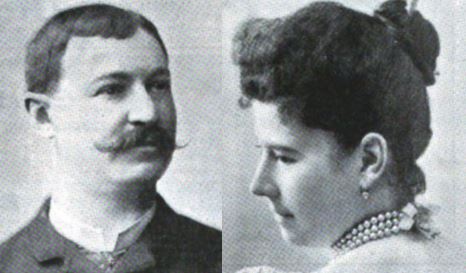 Sandör Rosner, Edwin Rousby’s real name, was a Hungarian vaudeville entertainer who specialized in performances that combined music, electricity, automatons, scale models, and light to create the impression of motion. He started his professional career in San Francisco in 1887 playing an electric organ as part of a show that included the Rosner’s Electrical Hungarian Orchestra, which he co-owned with his brother Edmund. In 1888 returned to Europe with the electric organ. He started touring Europe and the United Kingdom with the help of his first wife, Lilly Warda Rosner, whose professional name was Maud Irving (illustrated above with Rousby). In these early shows they added lighting effects and a 3D scale illuminated model of the Eiffel tower as a complement to the electric organ. In early 1896 he became one of the first to buy R. W. Paul’s Teatrograph/Animatograph. In May 1896, he and his wife travelled with it to Madrid, Spain. On 12 May they presented the Animatograph at Circo Parish. This makes him the first public exhibitor of the Animatograph and animated photography in Spain, beating Jean Busseret, the Lumière envoy, by just two days. Rousby added sound effects to some of the first showings, which most likely took place with the Teatrograph projecting from behind the screen. During his successful four week stay in Madrid, Rousby offered new films on a weekly basis, some of them in colour.

Rousby left Madrid and travelled to Lisbon, Portugal. On 18 June he presented his Teatrograph at Real Coliseu as a complement to a Portuguese opera, making him the first public exhibitor in that country. Much like in Madrid, he added some sound effects to the first showings and projected the films from behind the screen. His success in Lisbon led to a tour of northern Portugal After returning to Lisbon on 27 August, he reestablished his show at Real Coliseu. While competition from the Cinématographe in Madrid had not been a problem for him, starting on 15 August he endured the antagonism of the owners of another Lisboan venue, Teatro Dona Amelia. As a publicity stunt to attract people to the Animatograph they had ordered and planned to use in their theatre, the owners of Teatro Dona Amelia claimed that Rousby’s Animatograph was not authentic. The statements could have been based on the fact that although Rousby announced his machine as an Animatograph, in reality, he used a Teatrograph until mid-August 1896, when he either acquired or exchange it for a second generation Animatograph that he named “Animatograph Colossal”. During this time, Rousby received new films from R.W. Paul shot by Henry Short in Spain and Portugal. Even with this improved machine, the press exchange between both parties ramped up, although no real winner emerged. The feud finally ended on 30 August after an accidental fire at Teatro Dona Amelia destroyed part of the stage and some of the films.

To counterbalance the competition that was quickly spreading around Lisbon, starting on 31 October 1896, Maud Irving began offering a selection of some of the electrical numbers they used to perform before acquiring the Animatograph at Real Coliseu. They remained in Lisbon until mid-January 1897. On their last appearance in Lisbon, they gave 143 performances of sixty-seven different films. After publicly expressing his gratitude to the Portuguese audiences and promising to return soon with a newer and more exciting spectacle, Rousby and Irving returned to the UK and gave up the Animatograph shows for the rest of their professional careers. Throughout the next few years they developed two different types of shows that successfully combined electricity and light effects to create the impression of motion, and toured Europe, Australia, and the United States with them. In 1914, Rousby moved with his second wife to New York where he worked in vaudeville until 1919, the same year they became US citizens. They returned to the UK in 1923 four years before Rousby’s death.