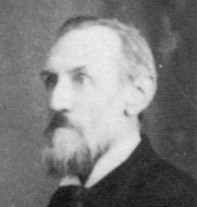 Born in Bath, the son of a wood-turner and antique dealer, Rudge was a scientific instrument maker by profession, as well as an entertainer who put on countless shows, earning the nickname 'Wizard of the Magic Lantern'. He started out using something similar to the Ross 'Wheel of Life', and later created a new type of apparatus, the Phantascope or Biophantic lantern. This carried seven slides in a rotating gallery moved by a cross-type mechanism, with a scissor-like shutter of two pieces of ground glass. The picture was held still for a moment, the shutter then obscuring the view (but not entirely shutting off the light) as the slide changed. He experimented with another similar device, but employing a slide gallery several feet long. Rudge met William Friese Greene about 1880, the latter having a photographic shop nearby in Bath, and they formed a close association. Rudge did most of the technical work whilst Friese Greene helped with the photography and put on some public demonstrations. This undoubtedly ignited Friese Greene's interest in moving pictures. In the mid 1880s, Rudge produced a lantern front with four converging lenses to project a slide with a sequence of four photographs on it. A rotating shutter directed the light to each one in turn, creating a 'moving' picture. Friese Greene's was amongst a number of faces with changing expressions recorded for this, and he displayed one in the window of his Piccadilly shop.

1887 saw Rudge screening a series of twelve photographs of 'A boy in an Eton collar'. These were taken on a single plate and some accounts say they were projected from a glass rotating disc. In 1890, Rudge demonstrated 'a new instrument' to the Bath Photographic Society, which worked on the 'dissolving view' principle. It had twin lenses which projected photographs alternately from two rotating discs, each one carrying seven pictures. His first demonstration was not fully successful, but he later sold one to a Birmingham showman. Rudge took out a provisional patent on 12 November 1884 for 'producing life-like effects with the optical or magic lantern', but he never completed it. Rudge's seven-slide lantern with slides, and his later double-disc mechanism, were acquired by Will Day and are preserved in the Cinémathèque Française. Aside from his projection work, Rudge claimed to be the first person to bring both electric light and X-Rays to Bath. He also invented a coin-operated weighing machine, a miniature electric train, a quick-firing gun and a self-inflating lifebelt.