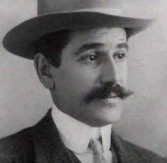 In 1897 Albert Samama Chikly, a Tunisian Jew, together with a photographer named Soler, organised the first screenings of Lumière films in a Tunis shop. The original twelve minute programme of films, bolstered by some magic lantern views, included such familiar titles as La Sortie de l'Usines and L'Arrivée d'un Train. In common with the introduction of film in many non-Western countries, Tunisia was offered its first films from a businessman who also introduced other modern novelties; in Chikly's case, the bicycle, radio and X-rays. Unusually, Chikly was to persevere in his film interests. He was active as an actuality filmmaker in Tunisia and France, succeeding in selling films to companies such as Urban, Pathé abd Gaumont. He lovingly documented Tunisian culture, filmed over Tunis from a balloon in 1908, experimented with underwater cinematography in a wooden submarine, and exhibited films at his Cinémato-Chikli.

Chikly made films during the Italo-Turkish War of 1911 (from the Libyan perspective), then worked for the French Army's Film and Photography units during the First World War, filming at Verdun and taking Autochrome colour photographs. He knew the Lumière brothers, Abel Gance and Rex Ingram, who wanted his actress daughter Haydée Samama Chikly to work in Hollywood. Chikly made the first Tunisian fiction films, Zohra made in 1922, and Ain el-Ghezal (The Girl from Carthage), in 1924, a remarkable achievement at a time when African filmmaking in general was almost non-existant. Both films starred his daughter, who continued acting in Tunisian films into the 1990s. Recent research has uncovered more of his history and some of his films, including portions of his two fiction films and a substantial collection of his war work at the French military archives. His tombstone bears the epitaph: ‘Tireless in curiosity, reckless in courage, audacious in enterprise, obstinate amidst trials, resigned to misfortune, he leaves his friends’.