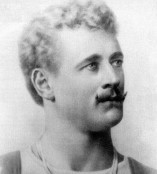 Born Frederick Muller in Konigsberg, Germany, 'The Modern Hercules' as he was known, was already an established entertainer when he travelled out to West Orange to be filmed in Edison's Black Maria on 6 March 1894. Like many others at the time, Sandow was greatly impressed by the legend of the 'Wizard' and it was said that he waived his $250 fee on this occasion for a chance to meet the great man and have his photograph taken with him. The film taken of Sandow was one of a number featuring athletes, gymnasts and acrobats taken by W.K-L. Dickson for use in the Edison Kinetoscope. Further films of Sandow's 'Muscular Exhibition' were taken in early 1896 by the American Mutoscope and Biograph Company, and one of them was included on the opening-night programme at the Palace Theatre in London in March 1897. Sandow married the daughter of an English photographer and settled in London where he opened an 'Institute of Health' in St James Street. He was the author of several books on physical fitness, regimen and diet. He died as the result of a stroke after single-handedly lifting an automobile out of a ditch.

Who's Who of Victorian Cinema: A Worldwide Survey.