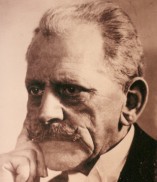 Born 30 April 1863 in Berlin, the son of a glazier who was later a small manufacturer, Max Skladanowsky is one of the genuine inventors of motion pictures whose extravagant claims in the 1920s and 1930s obscured his real accomplishments. He was first apprenticed in photography, then glass painting, and finally in optics at the Hagedorn workshops, manufacturers of theatrical lighting and apparatus, including magic lanterns. In 1879 he went on tour with his father, Carl, and older brother Emil (b. 1859) giving dissolving magic lantern shows; between 1881 and 1890 the family presented magic lantern, water fountain and mechanical theatre shows throughout Germany and central Europe. In 1890 Max and Emil constructed a mobile mechanical theatre which toured Germany during 1891 and Vienna, Budapest and Scandinavia in 1892. That same year Max constructed with Emil a chronophotographic camera designed for unperforated Kodak roll film and using a worm-gear intermittent movement, with which he shot his first film footage, forty-eight frames of Emil, on 20 August. By mid-summer 1895 Max had developed the Bioskop projector, a device derived from dissolving magic lantern practise using two loops of film 54 mm wide, with two lenses and electrical arc lamps and a worm-gear intermittent that projected alternate frames from each band so that it achieved the sixteen frames per econd needed to reconstitute full motion. The Bioskop was seen in a demonstration at the Gasthaus Sello in the Pankow suburb of Berlin in July 1895 by Julius Baron and Franz Dorn, directors of the Wintergarten Theatre in Berlin, and they immediately contracted for a public exhibition at their theatre beginning 1 November 1895, also the date of the Skladanowsky's patent for his intermittent movement.

Then located in the Martin Luther Strasse, the Wintergarten performances were the first projections of film in Europe to a paying audience. Rear projection was used, with stagehands keeping the screen wet to increase its transparency, and original scores were composed for the nine films by Hermann Kruger. Film titles were projected by a magic lantern and each film, which lasted about six seconds, was repeated several times. The film titles for the initial programme were: Italienischer Bauerntanz, Komisches Reck, Serpentine Tanz, Der Jongleur Paul Petras, Das Boxende Kanguruh, Akrobatisches Potpourri, Kamarinskaja, Ringkampf and Apotheose. Following this month-long exhbition, the Bioskop opened in Hamburg (from 21 December 1895) and was contracted to open at the Folies Bergere in Paris in January 1896, but after the Lumière screening at the Grand Café in late December 1895, the Skladanowsky engagement was cancelled, although their fee was paid in full. Recent research suggests that a similar arrangement may have been made for the show to appear at the Empire Theatre, Leicester Square, London in January, but this booking was similarly cancelled. The brothers then toured central Germany in March 1896, including Kothen, Halle and Magdeburg; Oslo (then Kristiana), Norway (6 April-5 May); Groningen (14-24 May) and Amsterdam (from 21 May), the Netherlands; Copenhagen, Denmark (11 June-30 July); Stockholm, Sweden (from 3 August); and returned to the Wintergarten, Berlin, in February 1897. A second film camera had been constructed in late autumn 1895, using a Maltese cross movement, and some films were taken with it in Berlin, Stettin, and particularly in Stockholm in August 1896, using professional actors from the Victoria Theatre company.

Their last film showing was in Stettin, Germany, on March 30 1897, with an improved single film band projector, the day that Max Skladanowsky's trade licence as an exhibitor expired; the Berlin authorities refused him a new licence since 'too many film licences were already in circulation'. Skladanowsky's major medium from 1897 was the production of flip books which re-used his film footage, although many were also produced using still photographs. He began the Projection For All (Projektion fur Alle) company to distribute 3-D anaglyphic lantern slides, published several albums of 3-D photographs, returned to giving magic lantern shows, and sold amateur film cameras, projectors, and printing equipment. The Projection For All company made a half-dozen films in 1913-14, some directed by younger brother Eugen, but with no significant success. In the mid-1930s, Skladanowsky's claims about his accomplishments led to deeply partisan arguments in the press, where the attacks were led by the historian and cameraman Guido Seeber. At the time Skladanowsky also toured with his opriginal Bioskop machine, now in the filmmuseum at Potsdam, for the fortieth anniversary of the birth of cinema. He died at Berlin-Niederschonhausen on 30 November 1939. While his solution to the problem of reconstituting motion on the screen proved to be a technological dead end, of the many inventors who tried to adapt the double-projection system of dissolving magic lanterns, only Skladanowsky produced a commercially used and widely seen apparatus.