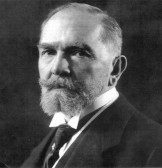 The long-established and still active German chocolate and sweets manufacturer Schokoladen- und Susswarenfabrik Stollwerck & Co. of Cologne played a unique and curious role in the invention and early days of the cinema. Probably as a result of their interest in automated vending machines for their candy, they actively pursued an interest in the new technical entertainments of the late nineteenth century, including mechanical music boxes, panorama machines, automat restaurants and other devices, primarily through the passions of Ludwig Stollwerck, one of the five sons of the company's founder. Ludwig Stollwerck was one of the three asscoiates in the Société Francaise du Phonoscope, founded on 20 December 1892, along with inventor Georges Demenÿ and William Gibbs Clarke of Lausanne; Stollwerck and Clarke provided together the 20,000FF capital for the company. Through their subsidiary Deutsche Automaten-Gesellschaft Stollwerck & Co. (DAG), Stollwerck became part of the Deutsche-Osterreichische-Edison-Kinetoscop-Gesellschaft created on 18 April 1895 which held exclusive rights to the Kinetoscope in German-speaking lands; they later tried unsuccessfully to gain the exclusive rights to the Edison phonograph; and they negotiated with British pioneer Birt Acres to acquire rights to his Kineoptikon cinema apparatus (leading Acres to patent his device in Germany and to take his famous early films of the opening of the Kiel Canal), before deciding instead to acquire rights to the Lumière Cinématographe. The first appearance of the Cinématographe in Germany was at the canteen of the Stollwerck factory in Cologne on 16 April 1896; it opened to the public in Cologne four days later. Stollwerck quickly opened the Cinématographe in Berlin (28 April), Stuttgart, Dresden, Hamburg, Hannover and other German cities, frequently in conjunction with industrial or trade exhibitions or as part of their own automat showrooms, as in Kiel (1 November). They also copied the Lumière organisaion, using their own representatives like Paul Behrens, who spent three months in Bremen, beginning 15 August, and 10 days in Wilhelmshaven beginning 7 December before moving to Jever on the 19th for a week.