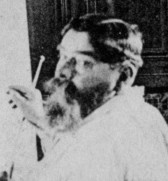 Tinayre was the son of Communards and spent eight years of his childhood in Hungary after his mother fled France. He studied painting at the Budapest Academy, returning to France in 1880. He soon established a reputation for himself as an atist, specialising in newspaper reportage. In 1895 he was sent by Le Monde Illustré to cover the quelling by French troops of an uprising in Madagascar, then a French protectorate. He became fascinated by the country, spending six months in the country where he produced many drawings, photographs and illustrations, and then a set of eight huge 'diorama' paintings on this return to France. In 1898 he returned to Madagascar to work on a giant panorama of the capture of the town of Antananarivo by the French in 1895. He took with him a Lumière Cinématographe. It is unclear how he obtained the camera, and nothing was known of the films that he took until his grandson presented eighteen surviving films to the Cinémathèque française in 2009.

The films depict Madagascan people going about their everyday lives, and include scenes of people ploughing, making roads, travelling to market, construction work, women carrying loads up and down a hill, boys making clay bricks, a forge, and market day. The figures are invariably mid-distance, and the films' composition sugests their use as aides-memoire for the artist in constructing his panorama. Tinyare exhibited his panorama at the Paris Exposition in 1900, then became official painter to Prince Albert I of Monaco (an oceanographer and enthusiast for cinematography) on his scientific expeditions in the Mediterranean, Atalantic and Arctic. A glacier on Spitzbergen Island is named after him. His son Yves became a noted baritone singer.