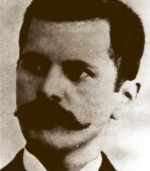 Film arrived in Venezuela in the form of the Edison Vitascope on 28 January 1897 at the Teatro Baralt, Maracaïbo, following a performance of the Donizetti opera La Favorita. The event was organised by Manuel Trujillo Durán, a dealer in American photographic supplies who had had business with the Edison company in the past. Trujillo Durán was a keen photographer who soon introduced two films of his own into the film programme, Muchachas bañandose en la laguna de Maracaïbo (Young Women Bathing in Maracaïbo Lagoon) and Un celebre especialista sacando muelas en el gran hotel Europa (A Famous Puller of Teeth at the Grand Hotel Europa). Thus the first Venezuelan film show and the film Venezuelan films (which were also the first native Latin American films) ran close together, and from the same man, an entrepreneur and enthusiast of wide interests and abilities. The Lumière Cinématographe was brought into the country by Gabriel Veyre, when he arrived in Caracas in August 1897.