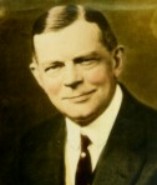 The most significant figure in the early British film industry was an American of German parentage who was born in Cincinnati. Moving to Detroit in the 1890s he ran a stationery shop before becoming a Phonograph salesman. It was through this activity that he came into contact with the inventions of Thomas Edison, and by 1895 was managing a Kinetoscope and Phonograph parlour in Detroit. In 1896 he obtained the agency rights for the Edison Vitascope projector for Michigan. In 1897 he became manager of the English branch of the firm of Maguire and Baucus, agents for Edison films in Europe. Establishing the business in London's Warwick Court, at which time the young Cecil Hepworth worked with him for a while, by 1898 he had reformed the company as the Warwick Trading Company and began to produce English films, as well as marketing his own Bioscope projector (developed for him during his time in America by engineer Walter Isaacs). Urban's powerful, ebullient personality and drive lay at the heart of what was soon to become the most prominent British film company of the period, with its reputation firmly based on documentary and news film. Warwick became particularly noted for its travel and war films. John Benett-Stanford and Joe Rosenthal covered the Boer War, and other noted cameramen working for Warwick at the turn of the century were Jack Avery (Urban's brother-in-law), F. Ormiston-Smith (who filmed an ascent of Mont Blanc) and F.B. Stewart. The Warwick Trading Company was also agent for a number of British and French firms, including Frank Mottershaw, James Williamson, Lumière and Georges Méliès. The latter was commissioned by Urban to produce a celebrated record of the coronation of Edward VII, filmed at Méliès's studio in Montreuil. Meticulous in its attention to detail, the film was completed before the event took place, but its release had to be postponed when the King fell ill with appendictis. Warwick also sold cinematographic equipment manufactured largely by Alfred Darling.

Urban's most notable professional association was, however, with G.A. Smith, the Hove pioneer. Urban first handled Smith's films, then employed him as an agent and engineer, and in 1903 directed Smith to work on an improvement to the Lee and Turner colour process. Kinemacolor, a two-colour additive system employing red and green filters and patented by Smith in 1906, was the most successful colour process of the early cinema period and added considerable lustre to Urban's name. In 1903 Urban broke away from Warwick to form the Charles Urban Trading Company (trademark Urbanora), reinforcing his reputation as a supplier of quality documentary film, but also diversifying to form the Natural Colour Kinematograph Company (exploiting Kinemacolor), the Kineto company and establishing the French firm Éclipse. He had a particular interest in encouraging the scientific film, with such series as the Unseen World, showcasing the microcinematography of F. Martin Duncan, and the zoological studies of Percy Smith. In 1907 Urban published a manifesto stating his belief in film as an educative force, The Cinematograph in Science, Education and Matters of State, and the following year he published his first Urbanora catalogue of educational films.

Urban remained a figurehead for the industry up to the First World War. Employed by British propaganda outfits to produce first the prestigious documentary feature film Britain Prepared (1915) and later editing the greatest battle film of the time, The Battle of the Somme (1916), he was sent to promote the British war effort on American cinema screens. In 1917 he co-edited the American propaganda newsreel Official War Review, and after the war attempted to re-establish himself in America. He founded the Kineto Company of America, whose chief product was the cinemagazine series Urban Movie Chats (largely composed of pre-war Urban library film), and co-founded the newsreel Kinograms (edited by Terry Ramsaye). In 1921 Urban relocated to Irvington-on-Hudson, NY, and established Urban Motion Picture Industries Inc, with vast premises grandly named the Urban Institute. Urban had always been interested in developing the home and educational market for his films, begining with his early involvement with the 17.5 mm Biokam home projector and, briefly, with Henry Short's Kinora flipbook device. Around 1907 he bought the rights to the Spirograph projector, which showed films on a celluloid disc, from Theodore Brown (optical experimenter and editor of the Kinematograph and Lantern Weekly). Urban's engineer Henry Joy developed the machine which was about to go into major production in 1923, along with Kinekrom, a supposed improvement on Kinemacolor, but at this point Urban's business empire collapsed. He returned to Britain in the late 1920s, and his later years were spent in relative obscurity. When he died in Brighton in 1942 his great contribution to British filmmaking, and in particular in nurturing a native talent for the film of actuality, was largely forgotten.