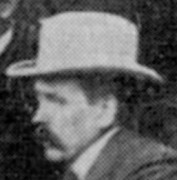 The first Scottish filmmaker was an Aberdeen bookseller and stationery supplier, with several shops run by Walker & Co., and a sideline interest in lantern shows, which he gave all over Scotland, including programmes before royalty at Balmoral. In September 1896, keen to acquire a projector to add moving pictures to his entertainments, but learning that the Lumière Cinématographe was unavailable he purchased a Wrench Cinematograph and gave his first show at 183 Union Street, Aberdeen on 30 September 1896. Walker soon began to produce his own films, taken for him by his technical associate Paul Robello (c1868-1961), who would remain a filmmaker for many years, running the Scottish firm Robello & Mann into the 1920s. Walker and Robello took local views and advertisements for local shops by filming the shop frontage, and toured widely with shows that combined film, slides and music on such themes as Charles Dickens and Robert Burns. In 1897 the Wrench machine was replaced by a Paul Theatrograph, and in that year Robello may have filmed the Diamond Jubilee procession of Queen Victoria. Certainly it was Walker who on 25 October 1897 showed Jubilee films to the Queen at Balmoral, along with other productions of his and films supplied by Maguire & Baucus. Walker was to give another 'command' performance on 28 October 1898 at Balmoral. Walker remained in the itinerant film exhibition business until 1910, when he established the Coliseum cinema in Aberdeen. Some financial crisis overcame Walker the following year and he sold all his film, bookselling and stationery businesses and moved to Glasgow, then to Newcastle where he ran a cinema and was involved in film renting. He returned to Aberdeen in 1922 but played no further part in the film business.