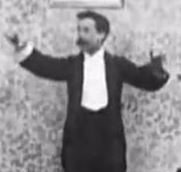 W.R. Booth was born 12 July 1869, son of a china painter. Apprenticed as a painter to the Royal Worcester Porcelain factory (1882), he worked there until about 1890. In 1895 he gave a comedy lecture in Worcester entitled Skit and Sketch, illustrated with sketches on a blackboard. In May and June 1897 Booth appeared in Exeter with Slade’s Animated Photographs (prop. W.D. Slade of Cheltenham). A keen amateur magician he joined the company of J.N. Maskeleyne and David Devant at the Egyptian Hall in London, and from late 1897-1900 toured with Devant’s Animated Photographs performing conjuring (sometimes as the Turkish Magician), ventriloquism and sketching. The films included productions by Robert Paul. Booth began devising and stage-managing (the then term for directing) short trick films for Paul, beginning with The Miser's Doom and Upside Down; or, the Human Flies (1899) in which, by turning the camera upside down, he made his actors perform on the ceiling.

Many of his early films were based on conjuring tricks (Hindoo Jugglers, Chinese Magic, both 1900), and with The Devil in the Studio (1901) he began to introduce effects involving cartoon type artwork. Later that year his Artistic Creation featured rudimentary animation, while his Political Favourites (1903) featured Booth rapidly drawing caricatures of Lord Rosebery, Joseph Chamberlain and other current politicians. By 1906 Booth had joined the Charles Urban organisation and made The Hand of the Artist, no doubt prompted by J. Stuart Blackton's Humorous Phases of Funny Faces of a few weeks earlier. Booth constructed his own outdoor studio in the back garden of Neville Lodge, Woodlands, Isleworth, London W., and here, with F. Harold Bastick as his cameraman, he produced and directed a large number of films for Urban. At least fifteen films a year were made up to 1915, after which he entered the publicity film market, making advertising shorts for Cadbury's cocoa and chocolate, including A Cure for Cross Words. He also invented an advertising method called 'Flashing Film Ads': 'Unique colour effects in light and movement'.