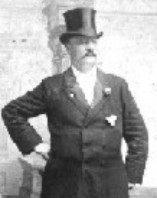 'King of Showmen', and generally accepted as the first to present a cinema exhibition on the British fairground

The venue was the Kings Lynn Valentine's Day fair, where he opened the show on 15 February 1897 (the 14th being a Sunday). Born in Liverpool, the son of a hawker, Randall Williams ran away from home at an early age to travel the fairs with his own conjuring show. Subsequently, in the 1860s/early 1870s, he was among a number of famous booth operators who sought to adapt the popular Pepper's Ghost illusion for fairground exhibition. His earliest rivals included George Walls, George Biddall, Alfred Walbrook, 'Colonel' William Clarke and George Mackey - all of whom followed Williams into the Bioscope business. From 1873, Williams was a regular exhibitor at the 'World's Fair', which took place at the Agricultural Hall, Islington, London, for a six week season, commencing Christmas Eve. For the season 1896/7 Williams took the bold step of turning over his familiar 'Grand Phantascopical Exhibition' entirely to the exhibition of moving pictures. The supplier of Randall Williams's first projector is not recorded, but about this time he developed a strong association with the firm of Haydon and Urry of Upper Street, Islington. Frank Haydon, George Urry, and their partner George Summerville were primarily makers and suppliers of coin-operated slot machines to pubs, penny-arcade owners, shop-showmen and fairground travellers. Possibly influenced by their neighbouring competitor George Barron of the Interchangeable Syndicate Co., Upper Street, who had been advertising 'Edison' projectors for sale since September 1896, they set about developing their own patent device.

Their first machine, The New Cinematograph, was offered for sale to the general public in late February, 1897. In April it was superseded by the Eragraph, taking its name from the national show-business paper, The Era . This machine Randall Williams both used and championed up to the time of his death. To ensure a supply of film for the Eragraph, Haydon and Urry established their own film production unit based in an adjacent photographer's shop in Church Street, which also functioned as a showroom and public cinema. To assist in the film-making process they employed two brothers, photographers Richard and James Monte. Home-produced subjects offered for sale by the company during the Summer of 1897 included The King on his Yacht at Cowes, The 1897 Derby and footage of Queen Victoria's Jubilee Procession. Haydon and Urry's machine was strong and reliable and they were soon to equip a large number of travelling showmen. Through his links as the firm's main film supplier and demonstrator, Richard Monte soon began to develop a fascination not only for the lifestyle of Randall Williams, but also for Randall's seventeen year-old daughter, Carrie, whom he married whilst she was still a minor. On 14 November 1898, Randall Williams's career as a cinema pioneer was cut tragically short when he contracted typhoid fever in Grimsby and died. Very soon after this, Richard Monte - one of the trustees to Randall's estate - assumed both ownership of Randall's show and also, more significantly, changed his name to Randall Williams. This has led to a great deal of confusion amongst cinema historians, compounded by the fact that Monte also offered varying accounts of his own achievements during his own lifetime, and always, pathologically, failing to even mention the existence of the real Randall Williams. Richard Monte died in the 1950s, after running a cinema for some years at Canvey Island.